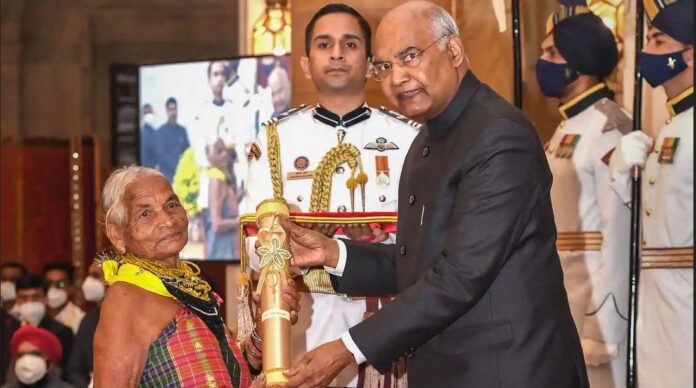 Karnataka is a popular travel destination for many. Besides the calm and peace present her, the weather is known to be pleasant throughout the year. This is also known for numerous temples that offer you an insight into ancient history and architecture. There are a number of ‘picnic’ spots and places where you can enjoy your passion for photography or even trekking.

Not many are aware that there are a number of popular personalities from Karnataka who have won the Padma Shri.

Here are some of the very famous personalities.

Tulasi Gowda, 77 years old, won the Padma Shri. He was barefoot at the time of receiving this award. He is known as the ‘’Encyclopedia of forests’. This award was given to him by the President of India, Ram Nath Govind.

Tulasi Gowda belongs to the Halakki tribe of Karnataka. He is an environmentalist from the village of Honnali, in the district of Uttara Kannada. She has given life to more than 1 lakh trees. This started from the time she was 12 years old.

She has gone through poverty from the time she was 2 years old as this is the time her father passed away. She got married to Govind Gowda when she was a minor. She started working in a nursery, taking care of seeds. These seeds were grown and later harvested by the Forest Department.

She was offered a permanent job as the government recognized her dedication to her work. She had a good knowledge of different trees and forests.

Harekala Hajabba, who is 68 years old, was a vendor of oranges in Mangaluru, which is a coastal district in Karnataka. Harekala was born to a poor family in New Papdu in Harekala, which is almost 25 kms from Mangaluru. Hajabba sold oranges for a living as he could not attend school. There were no schools at that time in his village.

There is this one incident that managed to change his life. He realized his misfortune of being uneducated when he could not understand two foreigners asking him the price of the oranges. At that time he decided that the children of his village should not face a similar circumstance.

He used to sell oranges in the market of Hampankatta in the city of Mangaluru. He saved from his earnings for this school. By 2000, he could realize his dream, as he started a school with 20 students. This was in a building that was in a mosque. He made all the effort to seek help from businessmen, politicians and celebrities for donations. The local media could highlight his efforts in the year 2004. He got an award of rupees 5 lakh. There were many corners from where he started getting good help. At present, the school is built on almost 1.5acres of land and 100 or more students are attending this from Class I to Class 10.

This effort that took almost 3 decades was recognized and he was awarded the Padma Shri.

A businessman based in Karnataka, Vijay Sankeshwar who is 71 years old, is also the chairman of the VRL group, one of the largest logistics firms of India. The journey of this businessman started in 1976 when he borrowed money from a money-lender against the wishes of his father, and bought a truck. He rose in VRL due to his credibility.

He started the Vijaya Karnataka, a newspaper and also Vijaya Times, which is an English newspaper. He sold this in 2007 to Bennet, Colemen & Co, Ltd. At present he runs a Kannada newspaper, Vijayavani. He also runs a news channel, named Digvijaya.

He was a former MP of the BJP, but left this and formed the Kannada Nadu Party.

This couple was awarded a Padma Shri for their contribution to education and literature. The father of Sampath Kumar founded the Sudharma, which is the only Sanskrit newspaper in the world. This newspaper was based in Mysore and was founded in the year, 1970. KS Jayalakshmi and Sampath Kumar got married in 1992 and she joined in the running of the newspaper. They managed to carry on running the newspaper, even though they faced financial constraints. Sampath Kumar also launched a newspaper with more than 4,000 subscribers worldwide,, more so from Germany.

Sampath Kumar passed away this year in July. He was only 64 years old.

Dr BN Gangadhar who is the former director of NIMHANS (National Institute of Mental Health and Neurosciences) was brought up in the city of Bangalore. He was fascinated with different stories of M Visveshwaraiah and CV Raman, when he was a kid. He even went to see where CV Raman lived.

He got curious about mental illness and this made him take MBBS in the Medical College in 1978. He retired as the head of this institution. His main research was carried out in ECT (electroconvulsive therapy), community psychiatry, schizophrenia, yoga and also public health. He has published around 300 or more research papers in not only national but also international journals.

He held many capacities as an administrator, including the honorary dean, consultant to WHO (World Health Organization), life sciences at the SVYASA University of yoga, president of the Indian Psychiatric Society Karnataka.

MP Ganesh (Mollera Poovaiah) was born in 1946. He is from Coorg in Karnataka. He is one of the best hockey players in the history of India. Ganesh’s life transformed when he joined the Indian Army. He comes from a humble background. He first, started playing for the Indian Army, and then played for India, making his debut in 1970.

He was a part of the specific team that won the silver medals in the year, 1970 and 1974 of the Asian Games. This team won the bronze in the World Cup of 1973. He not only excelled as a coach, but as an administrator when he was the director of SAI (Sports Authority of India).

He was the CEO of the KCA (Karnataka Cricket Association) after retirement.

Swamiji was born in 1931 to a Brahmin family of an orthodox Madhwa. For a long time he was the head of the Sri Pejavara Adokshaja Mutt. This is active in social service and also in providing education.

He followed the philosophy of the ‘Dvaita’ school and was also known for being associated with the movement of Ram Janmabhoomi. Many schools for the poor and hostels were established during his time. Here they provided education and food almost free.

Vishwesha did not believe in the concept of untouchability and to create awareness he visited a number of Dalit houses and colonies. The right-wing groups were not pleased with this. He also organized Iftar for the Muslims during Id at the complex of Krishna Mutt in Udupi. He died on 29th December 2019 at the age of 88.

KY Venkatesh, a para-athlete, was honored with the Padma Shri. He suffers from a condition that leads to dwarfism, termed as ‘Achonodroplasia’. He made sure this disease did not stop him from achieving success in football, hockey, basketball, volleyball and badminton.

Venkatesh won his 1st gold medal in the multi disability championship held in Australia in the year 1999. He also won a number of medals in javelin, short put, badminton, and a number of sporting events. Venkatesh entered the Limca Book for winning the maximum awards in 2005 in the world dwarf games.

He has been vocal about getting Bangalore to be a destination that is disabled friendly.

Karnataka Khadi Gramodtoga Samyuktha Sangh in Hubli is the only unit in the whole of India that is authorised to do the manufacturing and...

Ugly Side of a Present Day Life-style

Have you ever thought that your life can be imperfect even if you follow a fixed routine? Most of us try to ignore this...