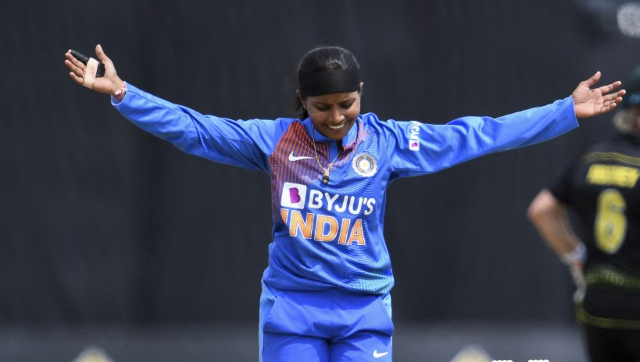 Five years back, in the last league game of the 2017 Women’s ODI World Cup, India took on New Zealand with Rajeshwari Gayakwad making her first appearance of the tournament in that match. She replaced Ekta Bisht in the XI and immediately made an impact, picking up a maiden five-wicket haul to help India thump the White Ferns by a whopping 186 runs.

She went on to feature in the semi-final win against Australia and in the final against England with India fielding a strong spin attack. Five years since, not much has changed despite Gayakwad’s impressive ODI record. India’s spin attack is so strong that Gayakwad isn’t guaranteed a place in the final XI, especially with spin bowling all-rounders available in Deepti Sharma and Sneh Rana.

That’s not to discredit Gayakwad’s exceptional ODI career so far. In 51 matches, the left-arm spinner has taken 81 wickets at a stunning average of 19.54 with five hauls of four wickets or more. That average is the fourth-best for any spinner in women’s ODI cricket (minimum of 50 innings bowled) in the 21st century.

What’s changed for Gayakwad is that she is no longer second in line to leg-spinner Poonam Yadav but at par with her with India even likely to field Gayakwad over Poonam in the 2022 Women’s ODI World Cup. The four-wicket haul in the warm-up game against South Africa only strengthened Gayakwad’s claims.

Prior to the tournament, Gayakwad, playing for India D, was also the third-highest wicket-taker in the Senior Women’s One Day Challenger Trophy with seven wickets at an average of 16.14. India D reached the final of the tournament where they lost to the India A side, but Gayakwad impressed again in the big game, taking 4/36 to derail the opposition in the middle overs.

The 30-year old left-arm spinner had humble beginnings in the sport after taking to it professionally at the age of 16. She enrolled in the Bijapur Women’s Cricket Club along with her sister, Rameshwari Gayakwad, after her father, who was an ardent lover of the game, came to know that the club was conducting a free training camp for girls.

A fast bowler in her initial years, Gayakwad switched over to spin at the insistence of her coach after he felt that she did not have the strength and height to be a fast bowler. It turned out to be a spectacular change. She was soon in the Karnataka women’s team and developed her game rapidly, earning an ODI debut against Sri Lanka in January 2014.

A wicket-to-wicket spinner who idolises Ravindra Jadeja, Gayakwad’s hard work has seen her rise up the ranks in India’s spin department. Her moment of glory in 2017 — the five-wicket haul against New Zealand in the World Cup — saw the Karnataka government offer her a car worth INR 5 lakh. She politely declined it, instead asking for a shelter for her family having lived in a rented apartment until then.

Ranked 15th in the ICC ODI bowling rankings heading into the World Cup, Gayakwad has had an excellent few months since the pandemic break. Since 2021, she has 14 ODI wickets in 11 matches, the third-most by an Indian bowler, at an average of 29.78. At the same time, in T20Is, she tops the wickets chart with 10 wickets at 15.40. She has also gone up to 13th in the ICC T20I bowling rankings.

Gayakwad will still likely tussle it out with Yadav for a place in India’s final XI. An impressive record outside home — 44 wickets in 26 ODIs at an average of 21 — should help Gayakwad’s case. But even if she doesn’t start, the spinner from Bijapur will know that should the opportunity come, she’ll be more than ready for it.

Kodagu is the official name of Coorg. This is considered to be a hill station that is most sought after in Karnataka. This hill...