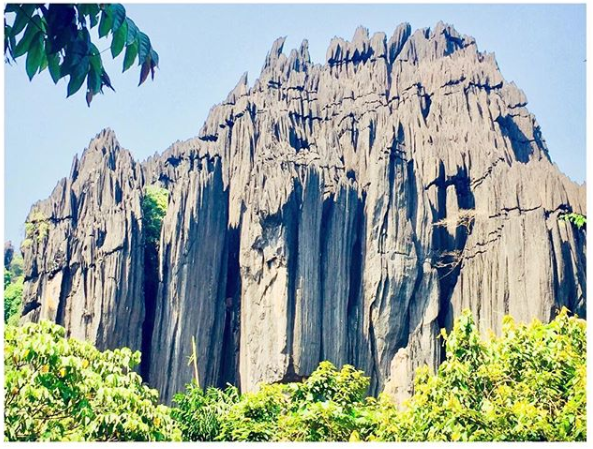 In the Sirsi and Kumla forests in Uttara Kannada, in Karnataka, you find the village of Yana. This is well known for the karst rock formations. This is in the mountain range of the Sahyadri in the Western Ghats. From Karwar port the distance is almost 37mi (60km), from Sirsi the distance is 24mi (39kms) and from Kumta, the distance works out to be 19mi (31kms).

This village of Yana is the wettest village globally and is alo the cleanest village in the state of Karnataka. The 2 rock outcrops considered ‘unique’ near this village are the main tourist’s attractions. This is approachable by a trek of 0.31mi (0.5km) of the thick forests from the road that is nearest.

The two massive outcrops that Yana is famous for are known as Mohini Shikara and the Bhaireshwara Shikara, ‘Shikara’ means ‘hills’. These rocks are composed of crystalline, solid black, karst limestone. The Bhairswara Shikara is 390ft (120 metres) in height, and Mohii Shikara, a little smaller, is 300 ft (90 metres) in height. Yana is also a pilgrimage center due to the cave temple that is located below the Bhaireshwara Shikara. Here a ‘Swayambhu’ linga has formed. This means, ‘that, which is ‘self-formed’ or ‘self manifested’. You have water dripping over the linga. This only adds to the sanctity to te place.

A car festival is held during the annual festival held during Shivratri. The area surrounding is known for its evergreen forests.

There is a link to the names of the rocks to Hindu Mythology. Brahmasura, a demon gets a unique gift. Anything that he places his palm on, turns into ashes, (bhasma). He wreaks havoc with this gift and tries to use this gift on the very person who had granted this to him. He was Lord Shiva.

Lord Shiva asks for help from Lord Vishnu, as he feared for his life. Lord Vishnu takes the form of a beautiful woman, Mohini. He appears before Brahmasura. Brahmasura wants to win over Mohini, and thus, accepts a challenge. He agrees to dance with her and follow similar steps. Mohini keeps her hand over her head as the dance progresses. Brahmasura follows this step and is turned into ashes.

The two rock hillocks rise in a sharp manner above the area surrounding it near the Yana village. These are a part of the hill range of the Sahyadri in the Western Ghats in South of India. These hillocks are able to give a conspicuous identity to the village of Yana.  In Bhaireshvara Shikara, the first hill, there is an opening of 9.8ft (3 meters) on the rock face that leads to a cave. There is a bronze statue of ‘Chandrika’ within this cave. This is called the ‘Chandihole’. This emerges eventually with the river of Afghanistan at Uppinapattana.

The local people here interpret this as a river, Gangobhava (emerging Ganga) emerging.  There are around 61 rock structures of limestone within a 3km radius. Two of these are of a huge size.

Vibhuti Falls is a natural waterfall that is located around 8km distance. ‘Vibhuti’ means ‘ashes’. This is another tourist’s attraction.

This is so named because the third drop, a stream that is not visible from the view point, is divided into 3 streams.

The creation of Shiva Linga naturally, is due to the phenomenon that is geographical, according to scientists. This was formed by stalagmites and stalactites.

An Official of the East India Company, Francis Buchanan-Hamilton, had surveyed this site in the year 1801. According to the reports, at that time, there was a population of 10,000 or more in and around. With the passing of time, the people have migrated to other regions for pursue their vocations. There are only a very few families inhabiting this place. One of these is the family of the ‘Pujari’ (the priest). Yana was a delight to the trekkers due to the 16km trek in the 20th century.

A Kannada movie – ‘Nammoora Mandara Hoove’ was shot here. There was an all-weather road made and this provided easy access to the place. Now the place is famous and has hundreds of tourists coming here.

How to Reach Yana

You have the choice of going by road, rail or even air to Yana.

There are several Karnataka State Transport Corporation (KSTC) and also private buses available till Kumta and Sirsi. Tourists can take public transport like buses and jeeps to reach Yana. Travelers to Yana can avail state and private buses from Bangalore, which is around 400kms. You have the option of hiring comfortable SUV’s.

The nearest railway station to Yana is the Kumta Railway Station. This is at a distance of 32kms. This station is well connected to the nearby areas, though there are no frequent trains coming here.

The best time to visit Yana is anywhere between October and February. You have a dry trekking path and there is a lot of greenery around. The trekking path gets slippery during the monsoons and thus it is best to avoid coming here at this time of the year.

The closest place for accommodation near Yana is the Kumta town. Sirsi works out to be a better choice as this has a short-cut road to Yana. Sirsi is 37km away.

Besides trekking, you also have the option of bird watching here.

You get once-in-a-lifetime chance of enjoying a lazy life in the Sahyadri Hills. Trying out the local cuisine is another delight you can look forward to in Yana. It is advisable to carry water and packed lunch when you visit the Yana Hills.

Located in the district of Mandya in Karnataka, Melukote is one of the most sacred places of South India. From Mysore, Melukote is at...