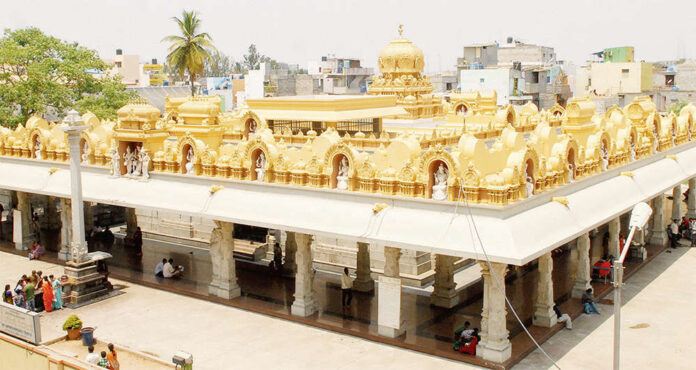 The Banashankari Amma Temple is a famous place of worship in Bagalkot district of Karnataka. This shrine is dedicated to Goddess Parvati.

The Banashankari Amma temple is a highly revered shrine located in Cholachagudda, near Badami in the district of Bagalkot, Karnataka. Since the temple is in the Tilakaraanya forest, it is also popularly referred to as Banashankari or Vanashankari. The deity is also called Balavva, Sunkavva, Shiravanthi, Chowdamma, Vanadurge, and Bandavva by the locals. Shakambhari is said to be the sixth incarnation of Goddess Durga.

The deity in the temple is also called Shakambhari, an incarnation of Goddess Parvati. The name Shakambhari is derived from two words, ‘Shaka’ and ‘Ambari’, which mean vegetables and one who bears to the hungry respectively. It also translates to vegetables joined to the root Bhri, which means to nourish. The Banashankari Amma temple attracts followers from Karnataka as well as Maharashtra.

The temple is believed to have been constructed in the 7th century AD, during the Kalyani Chalukya period. The Chalukyas worshipped Goddess Banashankari as their family deity. According to available inscriptions, the image of the Goddess was installed by Jagadekamalla l in 603 AD. The temple was later renovated by a Maratha chieftain, Parusharam Agale in 1750.

It is believed that the original temple stood even before the presence of the Chalukyas, who favored the Shaivite, Jain, Vaishnava, and Shakta orders. Banashankari was worshipped as a form of Shakti. According to various inscriptions, Jagadekamalla l refurbished the temple with various additions. Another inscription, found on a pillar on the northern side of the temple dates to 1019 AD and depicts the bravery of Bhimadeva, the Rashtrakuta king. The lamp pillar, or Deepa Stamba, found on the entrance of the temple, are believed to have been constructed by the warrior Ketimayya.

According to the scriptures like Padma Purana and Skanda Purana, the local people were constantly harassed by Durgamasura. The plight of these locals moved the Devas and they prayed for a way to kill the demon. Goddess Parvati answered these prayers, appeared through the Yagna, or sacrificial fire, and came down as Shakambhari. After killing the demon in a fierce battle, Shakambhari continued staying in the region to protect the locals. The temple is surrounded by forests with coconut trees, betel leaf plants, and plantain trees. It is therefore believed that even during a severe famine, the Goddess helped people by providing vegetables, which is why she was given the name Shakambhari.

Though the temple was originally built in the Dravidian architectural style, the rebuilt structure shows influences of the Vijayanagara architectural style. The temple is surrounded by a high wall. The main structure consists of a mukha mandapa or a portico. This is followed by an ardha mandapa or entrance chamber, followed by the sanctum. The sanctum is adorned with a Vimana or tower. The main sanctum houses the image of Goddess Banashankari, a black stone sculpture with the Goddess seated on a lioness with a demon under her foot. The image depicts the Goddess with eight arms, holding a trishul, damaru, kapaalpatra, ghanta, scriptures, and khadga-kheta. This Goddess was the tutelary deity of the Chalukyas. The Goddess is held in great reverence by the Devanga community and some Deshastha Brahmins. 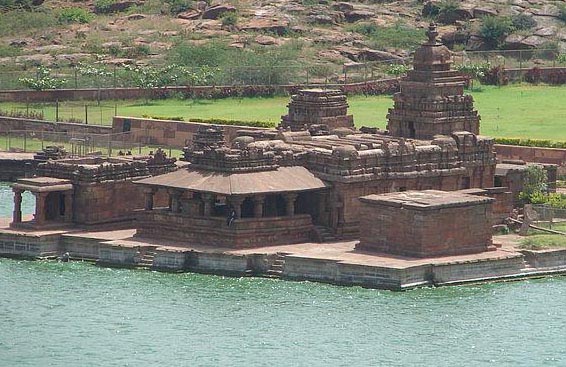 The temple also houses lamp towers, or Deepa stambhas at the entrance and on the west bank. The lamp towers are lit up during festivals, giving the temple a beautiful, ethereal look. The front of the temple has a square water tank, locally known as Haridra Tirtha. It is enclosed with mandapas on three sides and surrounded by a pradakshina path. The guard tower, reflecting the Vijayanagara blend of Hindu and Islamic styles, is called the Victory Tower.

The Banashankari jatre, or fair, is a festival with religious and cultural significance. This festival is held annually during the period of Rath yatra. It is believed that this festival originated around two hundred years ago. Believers from across Karnataka as well as neighboring Maharashtra assemble to celebrate this festival. The temple and town are decorated with several types of leaves and flowers. The fair starts with devotees making an offering of 108 types of food items to the deity. This is called the Palleda Habba, or the vegetable utsava. Devotees consider this period auspicious for events such as fixing marriages or even purchasing agricultural implements. Various cultural programs including circus, drama, and music are organized to entertain the community. Several shops selling clothing, sacred threads, sweets, and vermillion are set up during the festival. Another noteworthy activity is the sale of engraved door frames by artisans of Holeyalur and neighboring areas. This festival also witnesses a cattle fair, with special focus on the sale of white bulls. 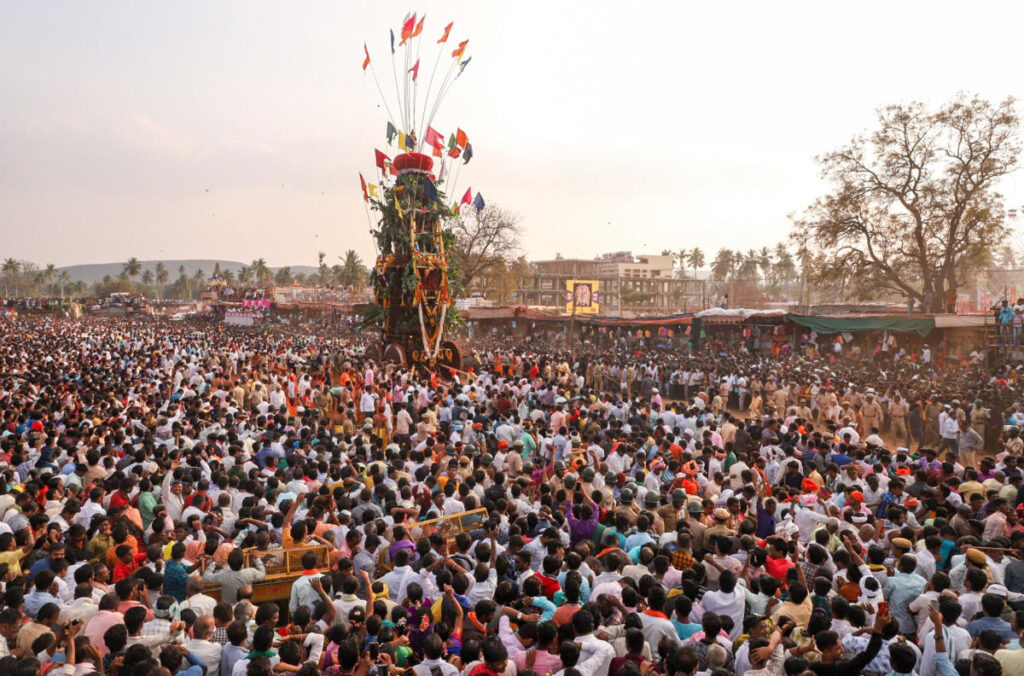 This festival is also known for another unique event, the Teppotsava, or the boat festival. This event is held in the temple tank, and parents ferry newly born babies on boats made of banana stems for good luck.

During the Rath Yatra, or the chariot festival, the Goddess Parvati is taken in a chariot through the streets of Cholachagudd. This occasion is witnessed by thousands of worshippers, who visit the temple in colorful carts.

The best time to visit this temple is from October to February, when the weather is pleasant. Moreover, the annual festival held in January/ February is a major attraction.

The Banashankari Amma temple is in Cholachagudd, around 5 km from Badami. The nearest railway station is Badami and is served by the South-western railways. The town of Badami is also well connected to the rest of Karnataka by a network of roads. It is around 495 km from Bengaluru and 125 km from Hubli, the nearest airport. You can use public transport to reach the temple from Badami. State bus services are available from main towns such as Hubli and Bengaluru.

Situated in the taluka of Thirthahalli of Shimoga district in Karnataka, India, Agumbe is a settlement. This is in a thick forest of Malenadu...

The Biligiriranga hills are referred to as ‘Biligirirangan’ hills in geology and biology and this hill range is in Karnataka south-west, with Tamil Nadu...