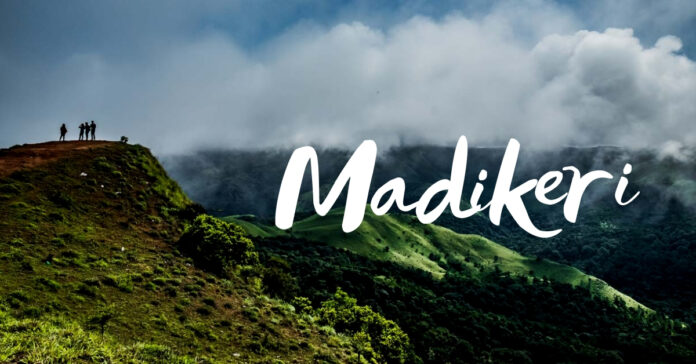 8 Places to visit in Madekeri

Madekeri is a hills station in the district of Coorg in Madekeri taluka, in Karnataka. This is the headquarters of the Kodagu district. Madekeri is known for its coffee plantations, weather and also greenery hills. A stroll through these plantations will fill you with the enticing and fresh aroma of coffee.

Listed below are some of the places you can visit in Madekeri.

This means ‘the seat of the king’, and is a garden of flowers and also artificial fountains. In Madekeri this is considered as an important tourists spot. This is around 270kms from Bangalore, which is Bangalore’s capital.

Raja Garden used to be ‘one-time’ favorite of the Kodagu kings who spent time with their queens watching the sun setting. There have been a chain of low and high rise mountains, layers of greenery and misty in these gardens. This used to be a recreation place for the Raja’s and thus, the name. This garden is built on a ground that is at a high level. It has a view of the valleys and cliffs to the west. The valley below offers a spectacular sight early morning when the sun is about to rise. You also have a Toy train for small children here. 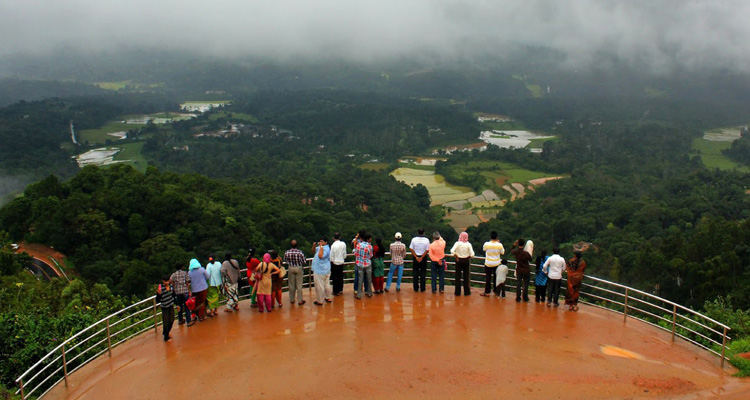 You need to ensure that you plan your trip here either early morning or when the sun is setting. This can be a golden opportunity not only for lovers of nature but also for different photographers.

You can spell Abbey Falls as ‘Abbe Falls’ or Abbi Falls’. This is a waterfall in the Western Ghats in Kodagu in Karnataka. From Madekeri, this is around 8kms, 144 km from Mangalore, and 122km from Mysore and from Bangalore it works out to be 268km.

This waterfall is on the Kaveri River on the early reaches, located between spice estates and also trees that are entwined with vines of pepper and coffee bushes. Opposite these falls is a hanging bridge. During the monsoons, the flow is really high. 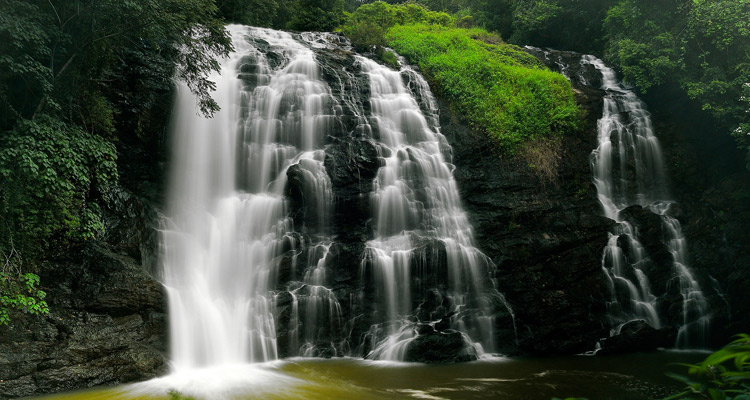 Earlier, these falls were called as the ‘Jessi Falls’. This was after the wife of a British Officer. Later, Mr. Nanaiah discovers this waterfall. This place was sold by the government to Nanaiah and converted into spice and coffee plantation. At present, the waterfall is surrounded by these plantations.

This can be termed as a ‘perfect’ getaway when you are looking for some peace and quiet, away from the hustle and bustle of city life. This can be termed as a ‘must’ visit for photography enthusiasts and lovers of nature. This is not only the best place in Coorg but also the best waterfall in South India. This waterfall falls down from a height of 70 feet in the middle of a landscape considered panoramic.

Mamdroling Monastery is one of the largest centers for teaching of the lineage of Nyingma of Tibetan Buddhism, globally. This is located in a part of Bytakuppe in the district of Mysore in the Karnataka state. This monastery is home to the community of sangha of more than 5 thousands lamas (nuns and monks), a religious college, a high school that is named Yeshe Wodsal Sherab Raldri Ling, and also a hospital.

The monastery was established by the Palyul lineage’s 11th holder of the throne, Drubwang Padma Norbu Rinpoche in 1963. This was after he left Tibet in 1959 as 2nd seat of the Monastery of Palyul. This was, before annexation, one of the great monasteries of Nyingmapa Mother. 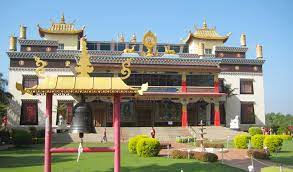 The full name of the monastery is Thegchog Namdrol Shedrub Dargyeling and in short, called ‘Namdroling’. The initial structure was made from bamboo that covered around 7.4m (80 square feet). This is carved into a jungle granted to the exiles of Tibet by the government of India. Rampaging elephants and tropical dangers were some of the challenges.

It is a delight to watch the prayers that are conducted every day at around 1pm. Washrooms and food stalls are provided. 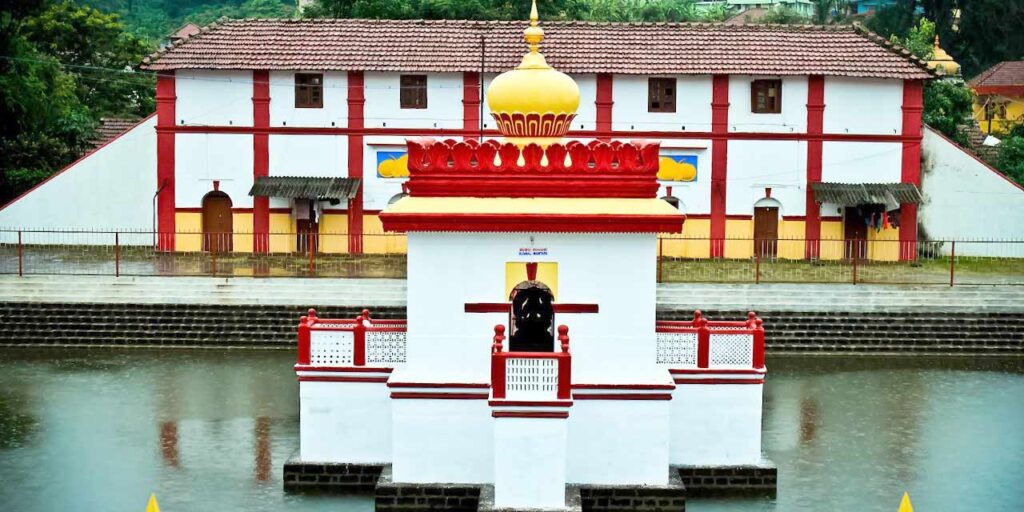 There are two temples here, one of which is dedicated to Mamleshwara (Lord of Immortal or Immortal lords of Devas) and the other one is Omkareshwara (meaning Lord of the Omkara sound).

There is a path around the hill that is circular. This is around 7KM and has many stairs that are up and down. There are a number of ashrams and temples on this parikrama path. There is also a confluence of two rivers.

The closest airport to Omkareshwara is Indore. Most of the different airlines operate here. The closes railhead is Omkareshwara road on the Khandwa Ratlam section. You can also take the road via different buses.

At present, Omkareshwara is a developed tourist place and you can find good hotels and other accommodations here.

Kote Betta, at 1620m above sea level, is the 3d highest peak in Coorg. This is situated in Hattihole locality, and is around 15km from the region of Madkeri. The meaning of Kote betta hills means ‘Fort Hill’ has a story that is mythical. According to the locals, the Pandavas of the Mahabharata spent a good amount of time in this place. This was during their exile. They had built a number of stone houses that are there even at present.

This is considered to be an ideal place for all those who love trekking. The trail through different coffee estates, villages, spice plantations and gardens of jackfruits are definitely an experience. The dense forests can work as a ‘feel good’ factor, along with the Western Ghats. 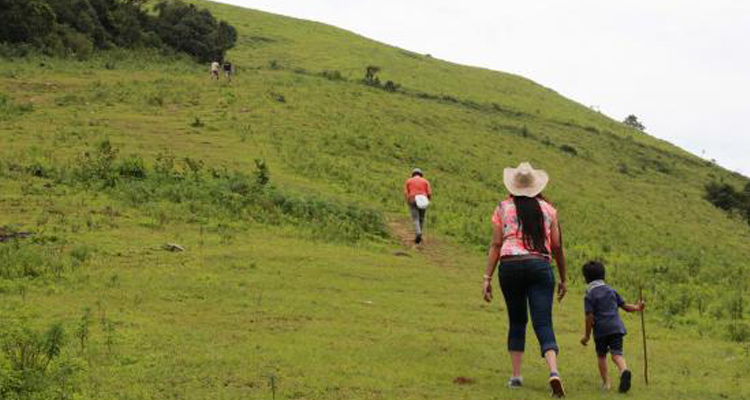 You can, probably, get a glimpse of wild dogs, elephants, mongoose which are stripe-necked, Sambars, civets, and more species.

As you come to the ground, you find a temple dedicated to Lord Shiva atop a rock that is easy to climb.

It is a unique experience to view the Harangi dam and Kumar Parvata from the top.

Besides cherishing the beauty of nature, you can also click some photographs for long-time memories. Camping here in these hills can be an adventure.

Rajas Tomb is situated around 1.5 kms from the bus stand of Madikeri. These tombs of Veerrajendra and his wives are similar and stand together. In 1809, the tomb of Lingarajedra was built. The tomb of Veerajendra was built in 1821. These tombs are made in the Islamic style and are gilded centrally. The turrets like minarets were topped with basavas (bulls) images. There are bars made of wrought bronze on the windows, made of stone that is sculpted.

The Raja’s tomb is also known as the Gaddige and is a monument of the 19th century. These are dedicated to the Kadava clan’s royal members. 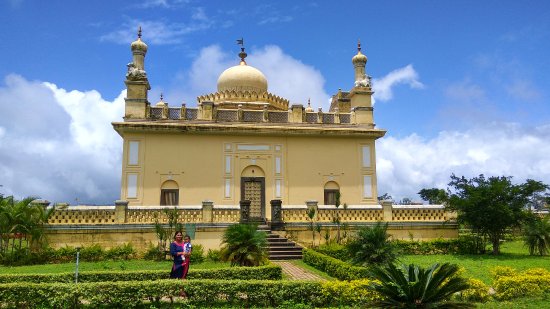 The central tomb of the tombs housed here, is the largest. The concept was inspired by the Taj Mahal in Agra, which was built by Shah Jahan.

The closest airport is in Mangalore, which is around 137km from Kodagu. Closest to Madikeri is the Mysore domestic airport, around 121km. From Madikeri, the Kannu International Airport is about 120km.

The closest railway stations to Madikeri are Mangalore of the Karnataka State and Mysore Hassan, and Kannur and Thalassery of the state of Kerela.

By road, you can go from Madikeri, which is only 2km away.

You find a collection of geological and archeological artifacts in the government Museum in Madikeri. This museum, which is an archeological one,  wasestablished in the year 1970. It exhibits old photographs, the 11th century sculpture, old dresses of the British, Rajas and Coorg, inscriptions, old implements,, bronzes, coins, arms and also wooden carvings. This museum also contains the costumes of the old rulers of Coorg.

Except on general holidays and Mondays, this museum is open from 9am to 5pm.

There is a display of gifts and certificates presented to Field Marshal Cariappa. This can be considered as a place that has historical significance. This is situated next to the fort.

How to Reach Madikeri

Madikeri rests against the soaring mountains and rolling valleys. You are welcomed here with cottages that have roofs of red tiles. Madikeri is connected well to other major cities with regular flights. Mysore airport works out the closest at 99kms distance. You can take a taxi from the airport.

There are no trains on a regular basis to Madikeri. Sakleshwar is the closest railway station, located at a distance of 58kms.

You can also plan on a long weekend in Madikeri with good hotels or other accommodations.

There are regular buses to and fro from Madikeri.

You can go to Mandalpatti via 2 routes, Makkanduru, which is 35km and Abbi falls junction, which is 20 kms. You will be amazed all the way with the presence of rivulets and small waterfalls. This can lead the way through the Kote Abbey.

Mandalpatti peak is located in adjust to the city of Madikeri. This is an undulating landscape surrounded by grasslands. Mandapetti is also known as ‘Mugilu-Peth’. This means ‘Market of Cloud’ (Mist). This is perfect for those looking to trek with family, friends along with elderly, as this trekking is easy.

Mandalpatti is elevated at 4050feet and is a part of the Pushpagiri reserve forest. This trail takes you through the expanse of forests, through streams, lush, green grasslands and also a view of the Western Ghats.

There is no entry fee and is known for its hill station, coffee plantations besides the trekking. The duration of the visit can take around 4 to 5 hours. This depends totally on the weather. Your visit might take a little more time if you are interested in photography.

This works as the perfect getaway for weekends, away from the hectic city life.

Dandeli is a town that is located in Karnataka. Most of the population of Dandeli is of economic migrants from all over in India....