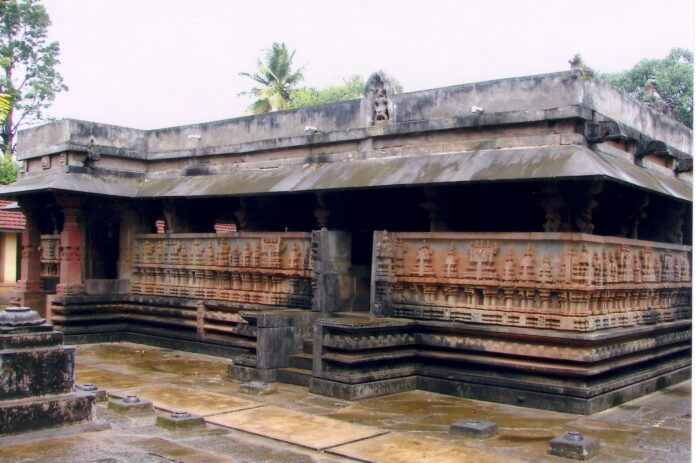 History of the southern part of India dates back thousands of years. This period was witness to the rise and fall of several majestic dynasties such as the Cholas, Pandyas, and Pallavas. The state of Karnataka is home to several historical structures including ancient temples and other historic sites.

The kings of most of these empires built grand temples and other structures as a mark of their power, establishment, and authority. Additionally, these temples served the role of being the centre of all activity including culture and art. This resulted in an evolution of various unique styles of architecture that even today showcase our glorious past. These temples serve as examples of the exquisite craftsmanship that was found in earlier times.

Keladi can be considered as one such example of brilliant architecture. The picturesque temple town of Keladi is located in the Sagara Taluk in the state of Karnataka. Keladi is around 8 km from Sagara town. This town was once the capital and also ruled by the Nayakas, once a part of the Vijayanagara empire. The Nayakas asserted their independence and ruled the region after the fall of the Vijayanagara empire.

The town of Keladi is most famously known for the Keladi Rameshwara temple. This temple is an extraordinary example of the Nayaka architectural style. It also shows influences of the Hoysala and Dravidian styles of architecture. The temple was built by Chowdappa Nayaka and has three main shrines in honour of Rameshwara, Parvati, and Veerabhadra.

Keladi is believed to be the first capital of the Keladi Nayakas. The capital was later shifted to Ikkeri, owing to Chandrappa Nayaka and then to Bidanur due to Virabhadra Nayaka.

According to legend, Chavuda Gauda found out that a cow belonging to him was shedding her milk over an ant-hill. When dug up, it was found to be a Linga. The temple was built on that exact spot. A little while later, his servants found an old sword while ploughing. They placed this sword into the thatch of the house with the intention of making a scythe later. However, they soon discovered, that if a crow perched on the shed, this sword took the form of a serpent and killed it. Chavuda Gauda, therefore, cleaned it and kept it in his house. In another instance, they discovered a cauldron filled with treasure. Afraid of the consequences of disturbing it, Chavuda Gauda covered it up. Later that night, he had a dream in which he was told to offer a human sacrifice and claim the treasure. His servants agreed to offer themselves on the condition that their memory was preserved. They were sacrificed with the same sword found earlier. Due to this accumulation of wealth, the Gaudas began to take over neighbouring villages. However, they were captured and sent to Vijayanagara. When they were released and offered confirmation of the places in their possession, they received a seal or sikha moharu from the king. This led to the formation of the town of Keladi along with the temple of Rameshwara. The mounds, or Kalte, at the entrance of Keladi, depict the sacrifice of the two servants.

This temple was built in the 16th century with schist stone in a green-grey hue. The temple was built in the east-west direction. The complex houses a garghagriha, or a sanctum sanctorum, a mukhamandapa or porch, and a mahamandapa or navaranga. The Keladi Rameshwara temple has a simple, elegant entrance, with wooden pillars that support a brick-tiled roof. This leads to a large courtyard. The wooden pillars have intricate details on them. The structures inside the temple showcase various Gods, floral motifs, leaves, and other articles needed for worship. The temple is dedicated to three deities, Parvati or consort of Lord Shiva, Rameshwara or Lord Shiva, and Veerabhadra, or the warrior form of Lord Shiva with each individual area showcasing distinct styles of architecture. Majestic structures of lions, tigers, horses, and elephants can be found on the walls along with structures of Ganda Berunda. The Ganda Berunda was a symbol of the Vijayanagara kings of Hampi, Wodeyars of Mysuru, and the Keladi Empire.

The temple has an elevated platform in the centre with a tall dwajasthambam right outside the Veerabhadra temple. Nandi, the vehicle of Lord Shiva, sits atop the Dwajasthambam, which is said to have been constructed during the reign of Keladi Chennamma. The Parvati temple is known for beautiful, intricate carvings on the roof and pillars. This shrine is decorated with red sandalwood.

The Veerabhadra temple has some of the most captivating and rare sculptures. The sculpture of Ganda Berunda can be seen on the ceiling of this temple, holding lions and elephants with its beak and claws. This shrine is also known for the granite carving of its pillars known as Vali columns. These columns depict mythical animals that have a face resembling a lion and a body of a horse.  Sculptures like that of the God of nine planets, or the Navagraha, the serpent motif, or Nagamandala, the carvings of Vastu Purush, or God of structures, and Daksha Prajapati are found in the Veerabhadra temple. The 24-feet Mahasthambha with Ganesha and Rani Chennamma paying respect, is another highlight of this temple.

At a distance of just 6 km from the town of Sagara, Keladi is well connected by road. The town is at a driving distance of 90 minutes from Shimoga. The best time to visit this temple town is from October to December, when the weather is pleasant. The temple can be visited from 6:00 AM to 8:00 PM every day. You can also plan a visit to other nearby tourist attractions such as Jog Falls, Ikkeri, Varadahalli, and Varadamoola.

The Keladi Rameshwaram temple has stood the test of time and is an inspiration for the future. It is evident that the kings that ruled this region left a huge impact on the religious structures and temples. Artisans from different times have used their knowledge of architecture to create these beautiful, awe-inspiring monuments.

India is one country that has many diverse states. Each of these has its own set of cultural heritage, Natural beauty, temples, waterfalls, rivers...