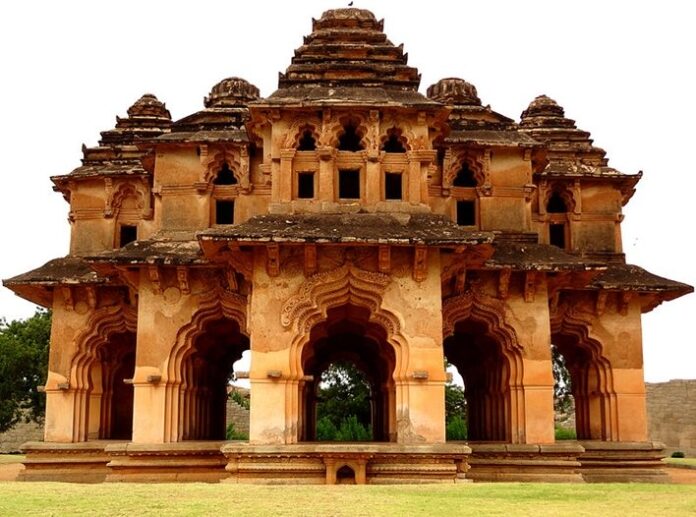 The Lotus mahal is one of the most renowned architectural landmarks in Hampi. A tour to Hampi remains incomplete without a visit to this beautiful edifice. This building is unique and easily identified because of its lotus-like structure. This masterpiece is found within the Zenana Enclosure.

Burrowed at the bank of the Tungabhadra River, Hampi is a beautiful heritage site. Hampi was the capital of the Vijayanagara Empire and is drenched in splendour and history. The majestic ruins of Hampi house over 1600 monuments. Hampi flourished under the Hoysala Empire between the 12th and 14th centuries. It is during this period that the majority temples on this site were built.

The Hoysala Empire was plundered twice, first by Alauddin Khilji, and then again by Mohammad bin Tughlaq. The ruined Hoysala Empire led to the birth of the glorious Vijayanagara Empire, one of the most famous Hindu Empires in the Southern part of India. Such was the glory of Hampi, that mentions of its glory and grandeur have been found in the writing of Persian and European travellers.

If you plan a visit to Hampi, you will need more than just a few hours to experience its magnificence. From temples, to shrines, market complexes, community kitchens, fountains, hill monuments, mosque, tomb, and water reservoirs, this site has it all. Though a significant number of these monuments are in ruins, a few are fairly intact.

One monument worth a visit is the Virupaksha temple, which is one of the oldest shrines found here. It is made up of smaller temples, a water tank, a monastery, and a huge market complex. Expansive work took place in this complex during the Vijayanagara reign. Another monument is the Vitthala temple and market complex. This structure lies to the north-east of the Virupaksha temple. It is believed that this sacred shrine was built in the early or mid-16th century. The temple is dedicated to an avatar of Lord Krishna, the Lord Vitthala. The Garuda shrine, a stunning stone chariot found in the complex, is one of the most photographed monuments in the region.

The Hazara Rama temple is another monument worth visiting. This temple dates back to the 15th century and is believed to serve as a ceremonial temple for kings. The inner and outer walls of the temple showcase some stunning artwork depicting marching elephants, galloping horses, Holi, musicians, and dancers. The inner wall also has an elaborate narration of Ramayana. This complex houses a yagna hall and a mandapam. Another noteworthy monument is the Pattabhirama temple complex that was built in the early 16th century as an ode to Lord Rama. This complex had a temple, a courtyard, a mandapam, and an entrance.

Hampi was, at one time, one of the richest cities of India. However, incessant invasions by the Mughals led to the downfall of the Vijayanagara Empire. One structure, however, witnessed it all and stayed intact. The Lotus Mahal, or the Kamal Mahal, is one of the best-preserved structures of Hampi.

Also known as the Kamal Mahal or the Chitragani Mahal, the Lotus mahal is an example of the Vijayanagara style of architecture. Though the exact function of this building is not known, it is believed that it was used as a socializing area for the women of the royal family. The palace served as an area to relax for the members of the royal family. It is also believed that King Krishnadevaraya used the Lotus mahal as his council chamber for his meetings with ministers. The Queen of Krishnadevaraya also spent a lot of time seeking peace at this palace.

The Lotus mahal is also believed to be the venue for several musical concerts and recreational activities. This structure falls under the secular categories of structures in Hampi. It is also noteworthy that this is one of the few structures left largely undamaged when the city was under siege.

Lotus Mahal translates to Palace of Lotus. This structure was built for the Royal family of the Vijayanagara Empire. This palace is built with bricks and mortar, setting it apart from most other structures in Hampi. This palace is an excellent example of a harmonious architectural amalgamation of two distinct styles.

The archways, the balcony, and the domed construction resemble a lotus bud. The centre dome also boasts of a carved lotus bud shape. The mahal is a two-storied structure. It has an open base floor and side walls with tall, arched windows. The upper floors also have tall, arched windows with hook-like structures. The windows on the upper floor are oblong and offer a stunning view of the garden below. The wooden blinds found on the windows are quite an uncommon feature in Hampi. The structure stands around a walled compound. The entire structure is symmetrical, with identical projections on all four sides. 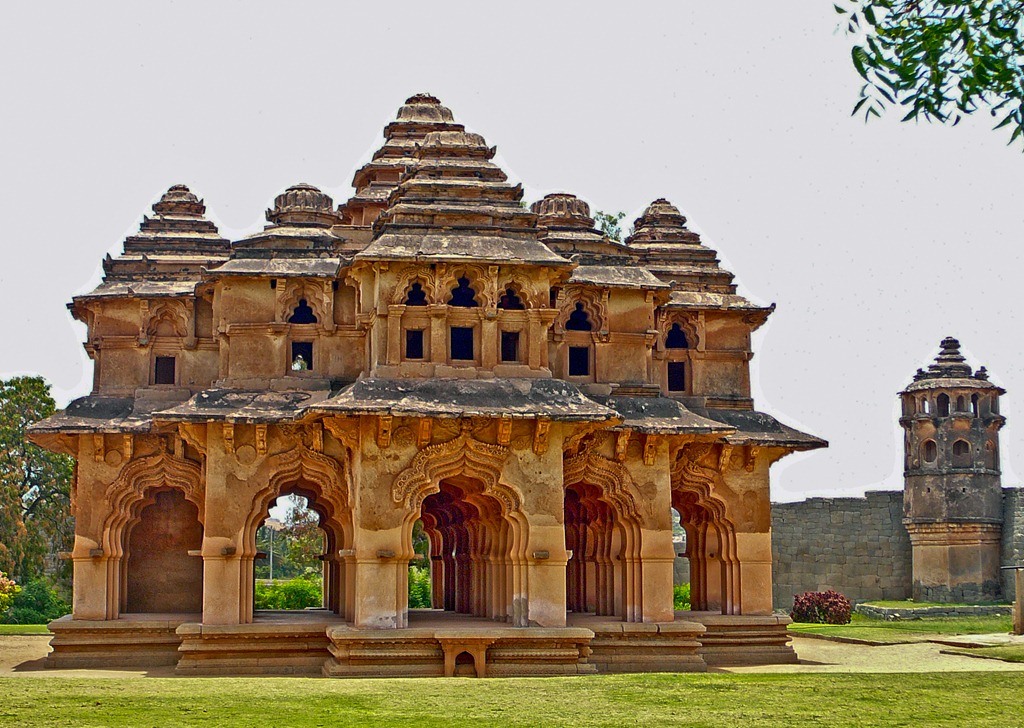 The decoration, architecture, and curves of the palace are a beautiful mix of Islamic and Hindu styles. The arches of the palace are inspired by Islamic architecture and also prove useful in protecting the palace from harsh weather. The roof, on the other hand, has a Hindu style multilayer. With nine superstructures, the roof resembles shikharas majorly found in Hindu temples. Both stories of the structure have arched openings in multiple planes. Elaborate designs grace these archways making the structure a sight to behold.

The Lotus mahal has pyramidal towers with one big tower in the centre. 24 pillars support the entire structure and are decorated with elaborate carvings of sea creatures, birds, and plants. Three watchtowers around this structure were used to keep an eye out for intruders.

The area surrounding the palace has several trees, creating a cool ambience. Evenings find the Lotus mahal lit up and provide visitors with ethereal views.

The Lotus Mahal is open on all days from 8:00 AM to 6:00 PM. The best time to visit is from November to February, when the weather is pleasant. The entry cost for Indians is INR 20 while for foreign visitors, it is INR 250.

The Lotus Mahal is easy to reach by road, with Hampi being well connected to almost all the major towns and cities of Karnataka. Bellary is the nearest airport, situated around 64 kms from Hampi and Hospet is the nearest railway station, at a distance of 10 kms. Additionally, a lot of private buses and taxis are easily available to take you to Hampi.