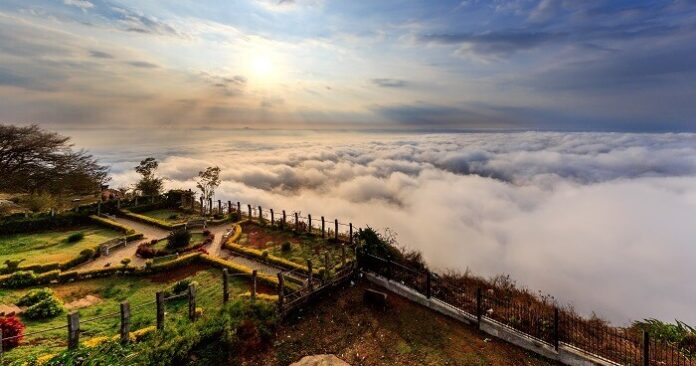 Nandi Hills is easily one of the most popular weekend destinations for the people from the city of Bengaluru. Also known as Nandi betta, Nandidurg, and Nandydoorg, the Nandi Hills is an ancient fortress located in Chikkaballapur, Karnataka.

The beautiful Nandi Hills are around 10 km from Chikkaballapur and 60 km from Bengaluru. These hills are also the origin of the rivers North Palar, South Pennar, Chitravathi, Arkavathi, and Papaghni. The fortress has been under the authority of the Paleyagars, Tipu Sultan, Marathas, and the British. It was also called Nandigiri according to ancient inscriptions.

The hills stand tall at an altitude of 4580 feet above sea level and were a tranquil summer retreat for the British and Tipu Sultan. With pleasant weather throughout the year, the hills provide you with an opportunity to take leisurely strolls and enjoy the serene atmosphere. You can also opt for parasailing, trekking, or visit other prominent places of interest from these hills. You can trek to Channakeshava Betta, Brahmagiri, Skandagiri, or Shravana Tirtha.

The vegetation found on Nandi Hills is typically found on higher altitudes. The hills have a large number of Eucalyptus trees, with an undergrowth of Coffea Arabica, and other native species. The hills are also rich in birdlife and popular among birdwatchers. The summit of the hill has an evergreen forest patch, making it a preferred location for various migrant species such as flycatchers, warblers, and thrushes. You can also spot the Nilgiri woodpigeon, peregrine falcon, the Malabar whistling thrush, pill millipedes, and Uropeltid snakes on the hills.

There are several stories behind the name Nandi Hills. According to one theory, the hills are so named due to the presence of the 1300-year-old Dravidian-style Nandi temple. The hills were also called Ananda Giri, or, The Hill of Happiness, during the Chola period. According to another legend, it is believed that Yoga Nandeeshwara completed his penance here and the hills are so named after him. It is also believed that the hills are named so due to their resemblance to a bull in sleeping position, or Nandi.

Nandi Hills are also referred to as Nandidurga, or fort, due to the ancient fortress built here by the Ganga dynasty and later strengthened by Tipu Sultan. The walls of these fortresses were stormed by the army of Cornwallis in 1791. This attack was one of the most significant incidents of the war of Tipu Sultan and is described in Browne’s History of Scotland. The fortress later became a summer retreat for the British officials.

Places to visit in and around the hills

The Nandi Hills are an ideal destination for adventure-seekers, trekkers, or even tourists who seek a leisurely visit. Places like Tipu Sultan’s fort, Tipu’s Drop, and Bhog Nandeeshwar temple are worth a visit.

Tipu Sultan’s Fort is also known as Tashk-e-Jannat, or Heaven’s Envy. The fort was actually strengthened by Tipu Sultan and Haider Ali. It features five arches with minarets and showcases the exquisite architecture of that era. The ceilings and walls of this fort are adorned with beautiful paintings. Once the summer abode of Tipu Sultan, the archways and towers of this fort are a major tourist attraction. 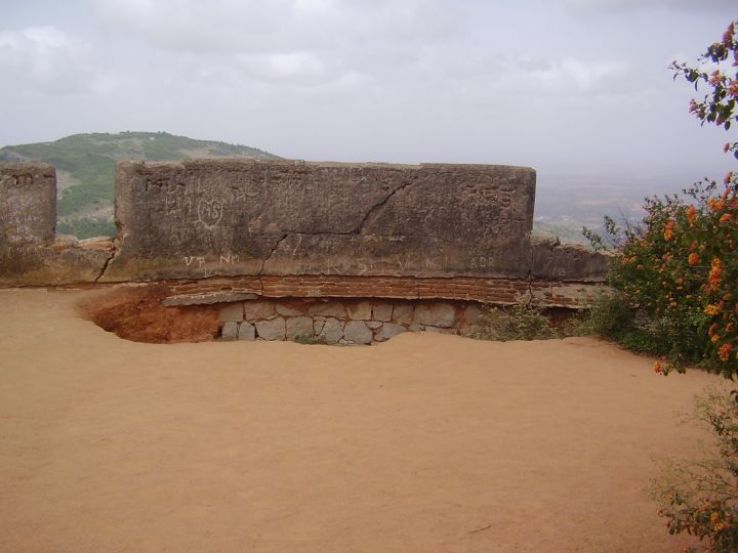 Tipu’s Drop stands tall at close to 2000 feet and offers a panoramic view of the surrounding environment. According to legend, this was the spot where Tipu Sultan forced his prisoners, condemned to death, off the cliff. 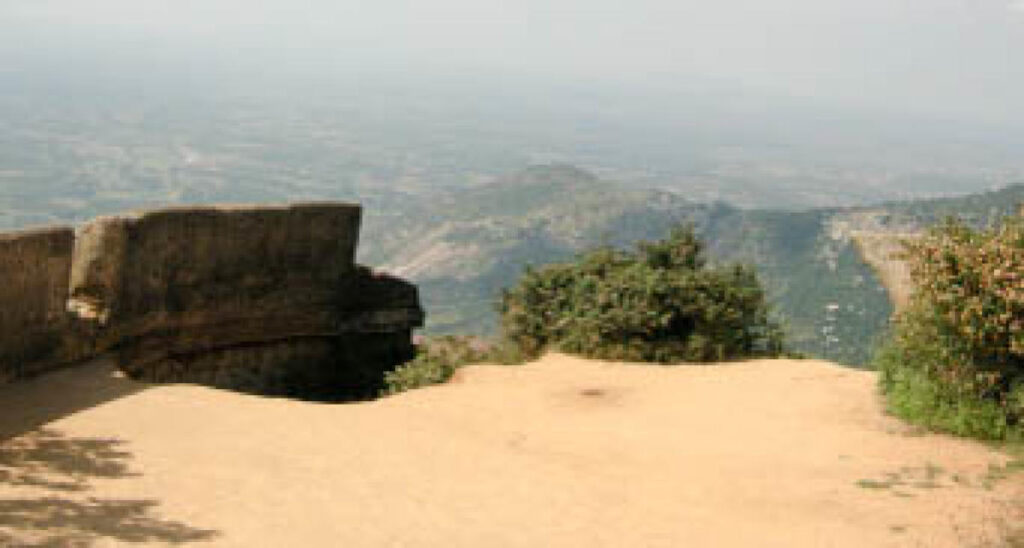 Both these temples are dedicated to Lord Shiva. The concept of twin temples, wherein two temples are built dedicated to the same deity on the top and bottom of a hill, is particularly popular in Karnataka. 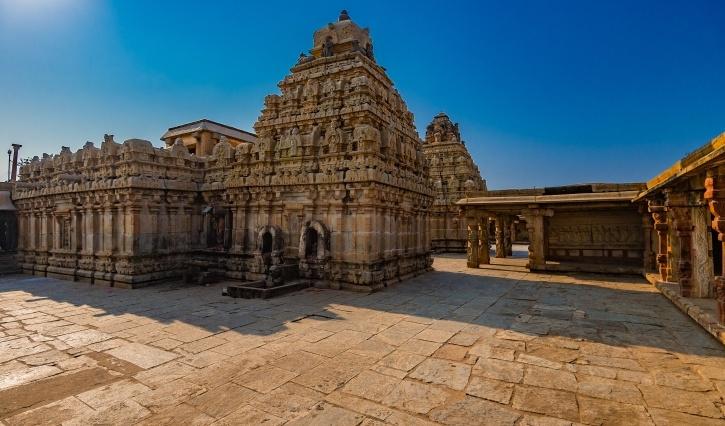 The Yoga Nandeeshwara temple is famous for the majestic statue of Nandi at its entrance. The temple is built in the Chola architectural style. The entrance of this temple, or the garbhagriha, has decorative doors and dwarapalakas. It is believed that these dwarapalakas were gifts from the Vijayanagara ruler Krishnadevaraya. The temples have monolithic stone pillars and are considered architectural masterpieces.

Amrita Sarovar, or Lake of Nectar, is a stunning water body formed by perennial springs. This water body is the prime source of water for the surrounding area. It is a sight to behold, especially on a moon-lit night.

Other places of interest are Gandhi house, a place of residence for the late Mahatma Gandhi. This residence is maintained by the DPAR Government of Karnataka. Muddenahalli is the home of the Museum of Muddenahalli that was built in honour of Sir M Visvesvarayya, one of the most accomplished scientists of India. The Nehru Nilaya, a beautiful colonial house, is another spot that attracts a lot of tourists. This 150-year-old house was the summer residence of Sir Mark Cubbon, the Commissioner of Mysuru. Surrounded by lush green gardens, this destination is now a guesthouse. 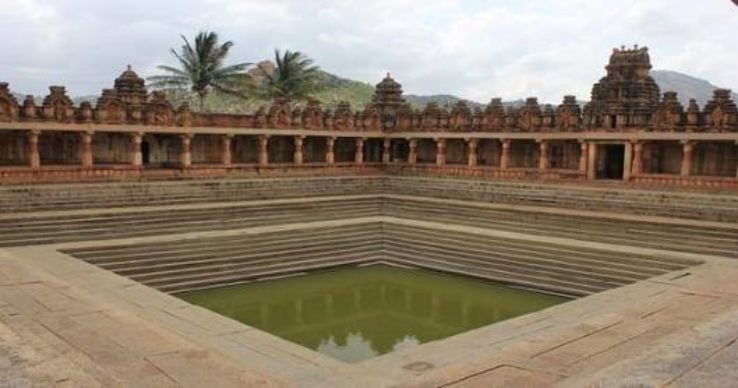 Nandi Hills is also known for adventure activities such as paragliding. The beautiful hills are also great for cycling due to excellent weather, altitude, and terrain. The area also has a garden and play area for families to relax. Several eateries are available to cater to tourists atop the hill as well as on the highway leading to the spot.

The hills can be easily reached by road, rail, or air. Nandi Hills is just 60 km from Bengaluru and 35 km from Kempegowda International Airport. You can choose private taxis to take you from the airport to the hills.

Nandi Hills is well connected to Bengaluru and can be reached by private taxis, cars, or even bikes. You can also travel to the hills from Mysuru, Bellary, and Devanahalli. The nearest bus station is Nelamangala at a distance of 43 km. The nearest railway station is Oddarahalli at 16 km with trains coming from Bengaluru.