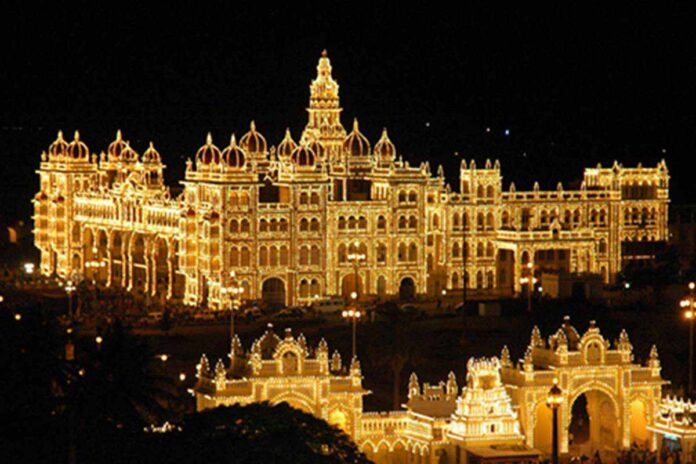 Mysore Dasara is the state festival (Nadahabba)of the Karnataka State in India. This is a 10 day festival that starts with the 9 nights of Navratri and the last day is Vijaydashami. This is on the 10th day of the Hindu calendar, Ashvin. This falls in the months of September and October.

This festival of Navratri, Dassera and Vijaydashami celebrates the good over evil victory. This was the day, according to the Hindu legends, Goddess Chamundeshwari, killed Mahishasura, the demon. Mahishasura slaying by the Goddess, gave the name ‘Mysuru’ to the city. This tradition in Mysuru celebrates the state fighting and the warriors for the good at the time of this festival. This worships the weapons, state sword, horses, elephants along with the Devi goddess in the form of a warrior and also the avatar of Vishnu, Rama. The king of Mysuru presides traditionally over the ceremonies and also the processions.

Dasara has been celebrated in Mysuru since a very long time with pomp and grandeur. This festival, in Mysuru, has completed 409th anniversary in 2019. There is evidence suggesting that the Karnataka state observed the festivities in the 15th century by the kings of the Vijayanagara Empire.

The Dasara started in the 15th century by the Vijayanagara kings. In the 14th century this festival played a historical role. At that time it was called ‘Mahanavami’. These festivities are displayed in the outer wall of the temple of Hazara Rama of Hampi.

Niccolo de Conti, the Italian traveler, described the intensity of the festival and the importance as a maritial and grandeur event with royal support. This event revered Durga as the ‘Warrior’ Goddess. The celebrations of this festival hosted dancing, singing, athletic competitions, a military parade, fireworks and also a charitable to the public.

After Vijayanagar fell to the Deccan Sultanates, these Hindu celebrations ended under the rule of the Muslims. A kingdom was formed by the The Mysore Wodeyars in the South part of the Vijayanagar Empire. This Mahanavami was continued, this was started initially by Raja Wodeyar in 1610 in mid-September.

The festivities included a royal assembly (special durbar). During Krishnaraja Wodeyar reign in 1805, the tradition of having a durbar was started in the Palace of Mysore, attended by the royal families, officials, invitees, and the masses.

After the demise of Srikanta Wadiyar in 2013 in December, this tradition is continued by the placement of ‘Pattada Katti’ (royal sword) on the throne. Mahanavami, the 9th day of Dasera is considered as an auspicious day. This is the day when worshipping of the royal sword is carried out. This is taken out in a procession involving horses, camels and elephants.

The most popular attraction of this Dasera festival of 10 days is the lighting of the palace. This is lit daily with 100,000 light bulbs from 7pm to almost 10pm. Different cultural and religious programs highlight the music, dance and culture of the Karnataka state. These programs are performed in front of the palace that is all lit up.

The traditional Dasera procession is held on Vijayadashami on the Mysore city streets. This is known as the Jumboo Savari. The Goddess Chamundeshwari’s idol is the main attraction of the procession. This is placed on the gold mantapa that weighs around 750 kgs. This is placed on top of an elephant that is decorated. The worshipping of this idol is carried out by the royal couple along with other invitees before being taken out in a procession. 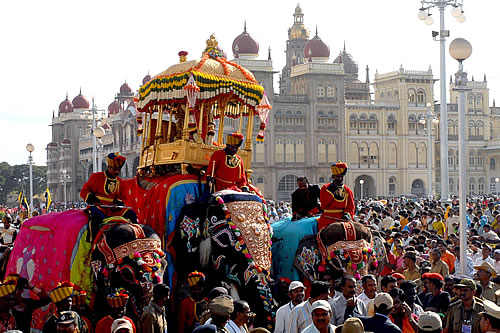 Dance groups, colorful tableaux, decorated elephants, music bands, camels and horses are all a part of the procession. This starts from the palace of Mysore and ends at a place Bannimantap, the banni tree is worshipped here.

According to Mahabharata, the tree was used by the Pandavas for hiding their weapons during the one-year Agnatvasa (live life incognito). The kings worship this tree traditionally before taking any warfare, for emerging victorious. The festivities of Dasera culminate on the Vijayadashami night with an event on the grounds. This is called Panjina Kavayatthu (torch light parade).

The elephant procession of Vijayadashami in Mysore is known as the Jumbo Savari. Jumbi Savari is the original name. At present, Goddess Chamundeshwari is taken on an elephant in a procession but the name remains the same.

After this Savari, a torch light parade is held in the Bannimantap Parade Grounds.

An exhibition is held in the Doddakare Maidana. This exhibition opens during Dashera but is open right till December. This showcases the religious and cultural heritage of the city in a beautiful manner. You can shop for kitchenware, clothes and a lot of other souvenirs. You also find different options for entertainment. Besides the Ferris wheel there are thrilling rides you can enjoy. Authentic cuisine is another attraction of this exhibition. 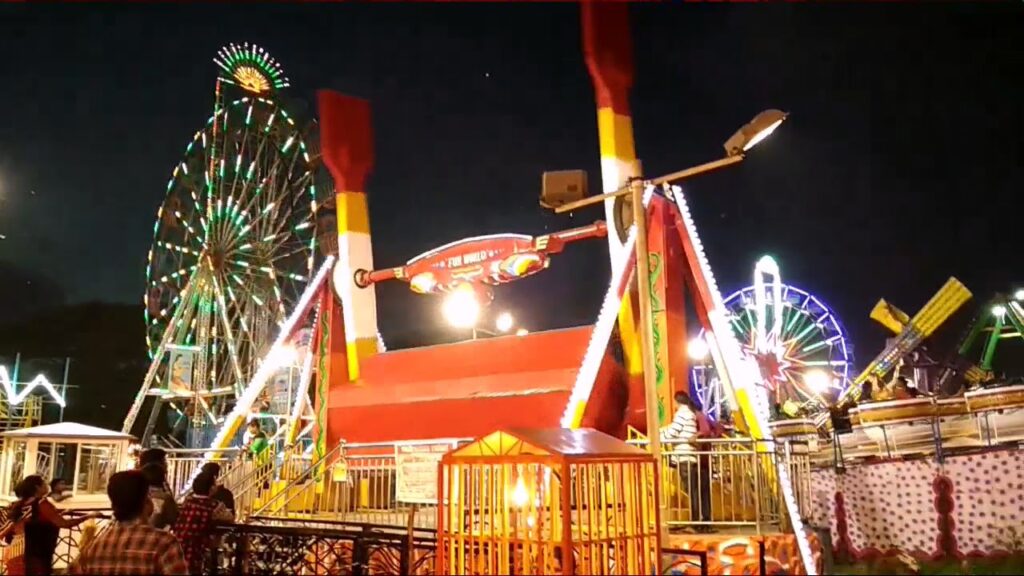 Wrestling has been an important part of the festivities of Dasara. The Nada Kusti event is one event that promotes the art. Different wrestlers from all over the country compete for the title. This wrestling is a once-in-a-lifetime experience for most. 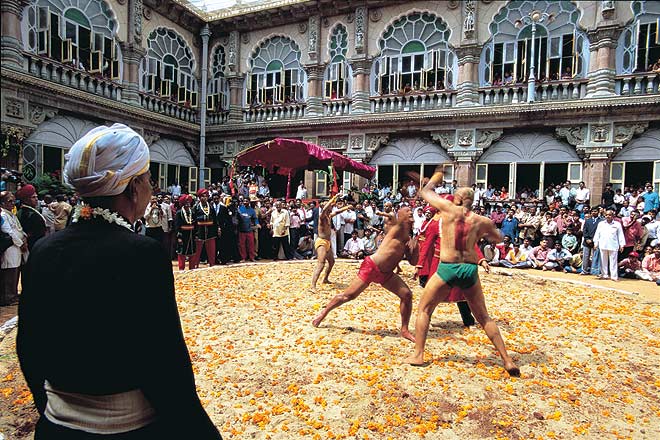 Visitors from different parts of the country come here to witness the flower show. This takes place in Nishad Bhag or the Kuppanna Park. A collection of different flowering plants is showcased at this time. This works out a visual treat. 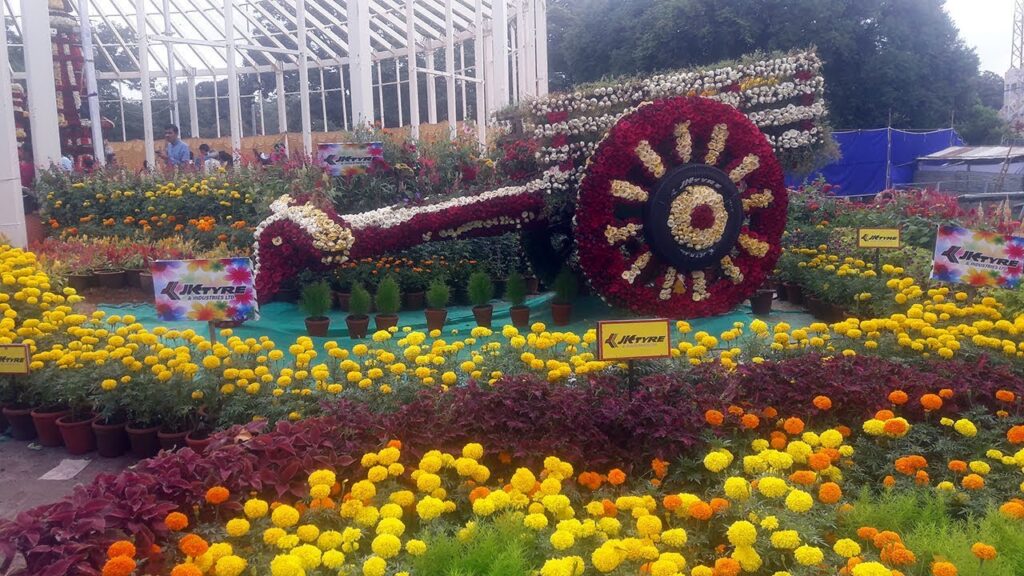 Throughout this region, during Dasara you have a number of events and celebrations going on. From film festivals to sporting events, to yoga and heritage tours keep you well entertained for all the ten days.

Cannon Firing is another important part of the Dasara festivities. This gun salute of 21 is carried out as a mark of respect for the Chief Guest. The Armed Reserve Personnel carry out the salute with the National Anthem. Rehearsels are conducted well in advance before the Mysuru Dasara festival. This familiarizes the horses to the loud sounds.

There is total charm to this festival as the state as managed to preserve the old tradition.

Twin sisters from Hassan have secured identical scores in the 2022 SSLC examinations in Karnataka. Ibbani Chandra K.V. and Chukki Chandra K.V., daughters of...

Introduction The Hoysaleswara temple, or the Halebidu temple, is one of the largest temples dedicated to Lord Shiva. It is located in Halebidu, a town...

The Karnataka government conferred the ‘Karnataka Ratna’ award on late actor Puneeth Rajkumar during an event held at the grand steps of Vidhana Soudha...