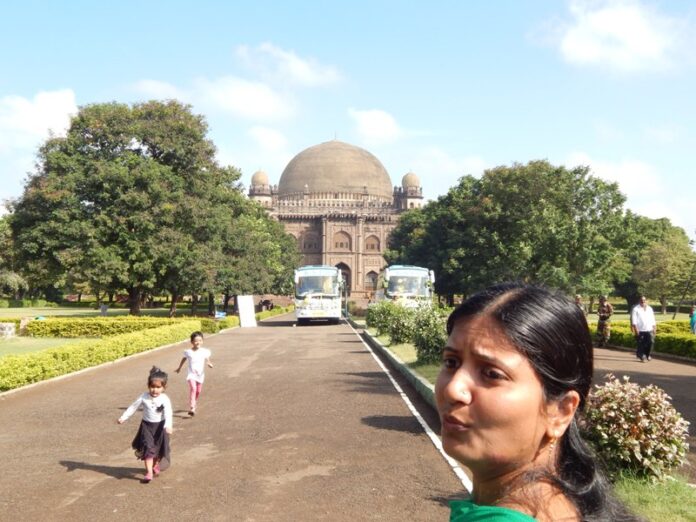 India has many diverse states. Each of these states has their own set of historical riches and cultural heritages. Karnataka is one such state that has many places that are not only popular but can be termed ‘interesting’. You find many wildlife sanctuaries and national parks besides other places you can visit.

Here are the 10 most interesting places you need to visit when you are in Karnataka.

Gol Gumbaz is a tomb of Mohammed Adil Shah of the Adil Shahi Dynasty. The construction of this tomb in Bijapur started in the year 1626 and ws completed only in 1656. The name, ‘Gol Gumbaz’ is from ‘Goal Gummata’, which means ‘circular dome’. When someone standing in this gallery whispers, it is heard throughout.  A clap echoes multiple times. 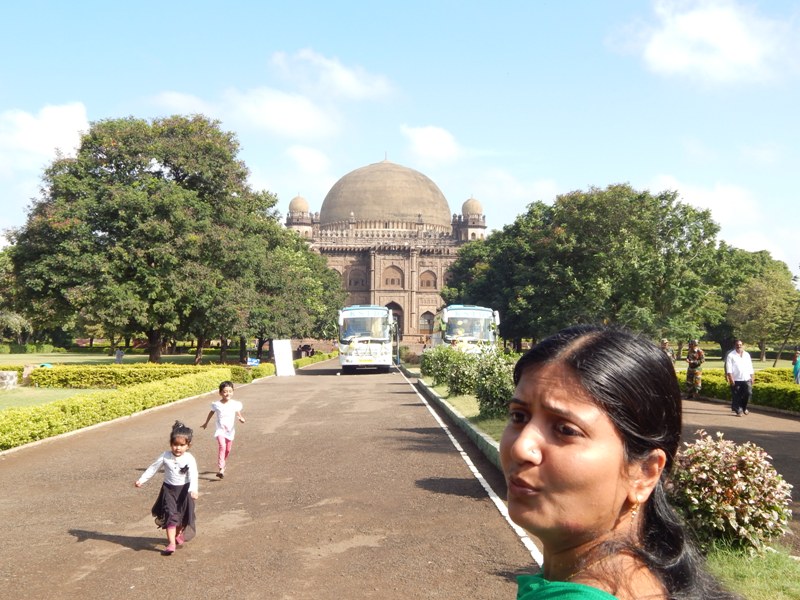 This tomb has four minars, and each of these has seven floors with staircases. From these minars you can get an overall view of Bijapur. The most amazing part of this dome is that the central part stands sans any pillars.

The entry fee here is Rs.15/- for Indians and Rs.200/- for other nationals. You do not need to pay any fees for children below 15 years of age.

Anywhere from 1 to 2 hours.

Anytime between the months of October and March is the best time to pay a visit to Gol Gumbaz. This is the time when the climate is pleasant and the temperature ranges from 20 to 30 degrees C. Summers can be uncomfortable.

Mysore Palace is officially known as the ‘Mysuru Palace and is a royal residence located in Mysore. It is considered to be an official residence of the Wadiyar dynasty. This palace is located in the center of Mysore, facing the Chamundi hills.

As known, Mysore is known as a ‘city of palaces’ and this palace is one of them.

Mysuru was the name of the land on which the palace stands at present, but is now known as the ‘new fort’.

Mysore Palace is one among the very few palaces that is opened to the public. Besides the breathtaking expanse and splendid architecture, this palace is known for its rich heritage. The government has managed to preserve this heritage.

Mysore Palace is considered to be second to ‘Taj Mahal’ and this is enough of a reason to visit this place.

Between 7 and 7.45 pm, everyday, there is an amazing sound and light show organized by the palace. This also gives you an insight to the history of this palace through the narration.

This should be around October as the palace is totally lit up due to the Dushera celebrations.

You can avoid crowds if you decide on a weekday.

Located in the Western Ghats, Jog Falls is a waterfall on the river Sharavati. This is said to be the 2nd highest plunge waterfall in India. This is a segmented waterfall that becomes a ‘plunge’ waterfall depending on the season and the rain.

Jog Falls is said to be the largest station for generating power in India. The power station was built in the year 1948. The capacity was 120 MW. This power station was named after the king of Mysore, Krishna Rajendra. 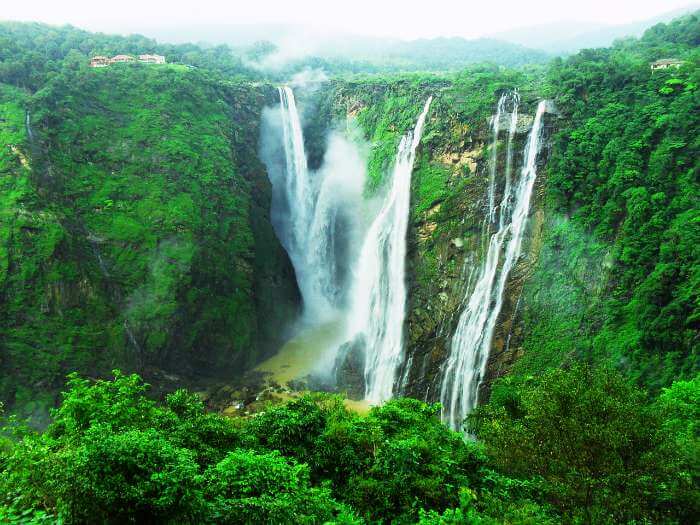 Jog Falls is four falls combined. This plunges into a gorge in 4 different streams/segments. Each of these segments has a different name. King (Raja) pours in a continuous, single stream in a majestic manner, Queen (Rani) has a curvy stream and is an alluring sight. Roarer crashes on many rocks during the fall and rushes downwards in a violent manner to the base, making a loud noise. Finally, you have Rocket that streams out of an opening that is small, and shoots down at high speed in different series of jets.

Raja is 830ft and is said to be the highest waterfall joining Roarer at a specific point.

It is best to visit these waterfalls during monsoon, which can be anywhere between June to August.

This should be around October as the palace is totally lit up due to the Dushera celebrations.

You can avoid crowds if you decide on a weekday.

The Badami Cave temples are Hndu and Jain temples located in a town named Badami in the district of Bagalkot. These temples are the best examples you can find of rock-cut architecture that is Indian. You get an insight to the Badami Chalukya Architecture.

Not only are these rock-cut temples fascinating, but you enjoy the beautiful landscapes.

These Badami temples attract a lot of tourists due to these temples that are carved out of a huge stone cliff.

There are 4 temples in Badami, and each of these has carvings considered intricate. You also find the teachings and mythological events of Hinduism, Jainism, Buddhism depicted here. 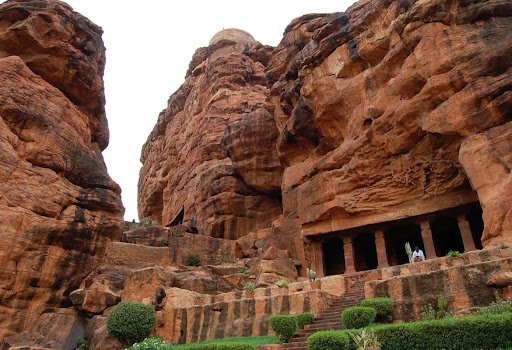 The Badami architecture actually inspired the Vijayanagara Empire’s architecture. These temples that are ‘rock-cut’ are said to be the finest in the whole of India. The restraint and versatility is well-balanced here.

You can say that ‘time stands still’ when you visit these cave temples. This can be one place considered to be a haven for photographers.

The best time to visit Badami is anywhere between July and March. The winters here are mild and the rainfalls are moderate.

You can choose between road, rail and air to travel to the cave temples.

Built by the Ganga Dynasty, this hill fortress, Nandi Hills, was later strengthened and enlarged by Tipu Sultan. This is located around 10kms from Chickballapur and from Bangalore this is around 60kms. These hills are near Nandi town. 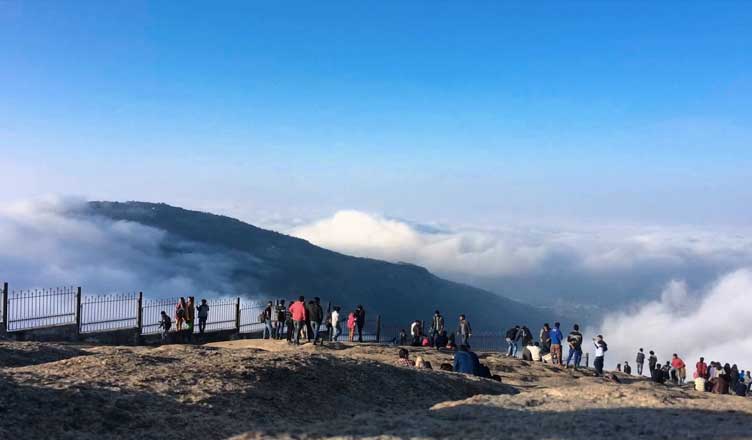 Nandi Hills is apt for those looking to get away from the hustle and bustle of city life. Situated at a height of 4581m above the sea-level, these hills are a perfect gift of nature.

Nandi Hills offer you an opportunity to get involved in all the adventures you like. You can trek, cycle or even paraglide. The terrain is ideal not only for professionals but also trainers.

You can enjoy water bodies near these hills as you find the tributaries of the Kaveri River. This originates from the Nandi Hills.

There are many resorts you can relax in near the foothills of Nandi. One of these is the Grover Vineyards, which is famous for making wines.

The best time to visit these hills anytime from July to February. Monsoon is apt for those who intend trekking. Winters also work well but not summers. This is due to the heat which is quite uncomfortable.

Located in Aihole, the Durga Temple is a Hindu temple of the 8th century. The relief panels here are largest and most embellished, depicting Vaishnavism, Shaivism and Shaktisim artwork along with other Vedic deities. The apsidal plan of this temple is another major attraction besides the carvings. This is considered to be a ‘rare’ example of Hindu temple architecture that is Hindu Chalukyan.

This temple is dedicated to Surya, but is named as ‘Durga’ temple due to the fortified lookout or durg that was made on top of this after the 13th century. 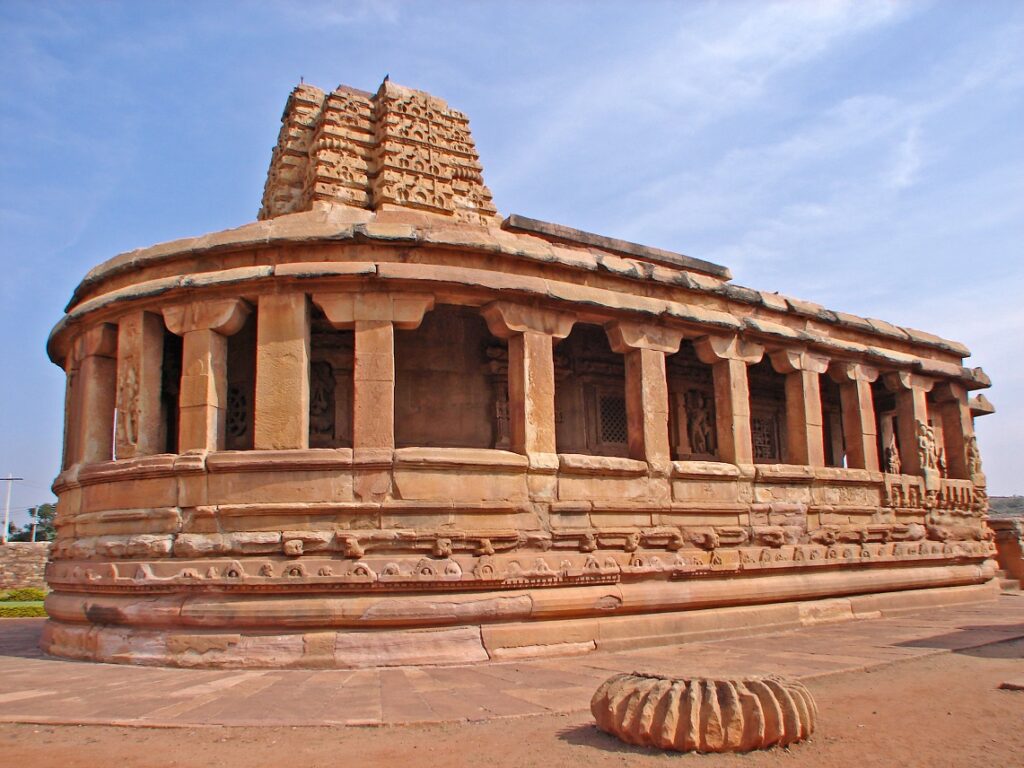 These temples are not in use so there is no regular worship or rituals performed here. You can enter this temple anytime from morning to dusk.

Aihole is connected to the major cities of Karnataka. You can hire cabs to this temple as the roads are good.

Belgaum Airport is the nearest airport to Durga temple, Aihole.

The Hubli-Sholapur meter gauge line is the nearest station to the Durga temple, Aihole.

Shravanabelagola is not only rich in legend and history, but this is also about lush greenery, beautiful roads and timeless rocks.

Bahubali is a revered figure among the Jains. He was the son of Rishabanatha, and brother of Bharata Chakravartin. It is said that he meditated in a standing posture for over a year. It was during this time, the climbing plants grew around the legs. He is said to have attained omniscience (Kevala Gyana) after a year of meditation. 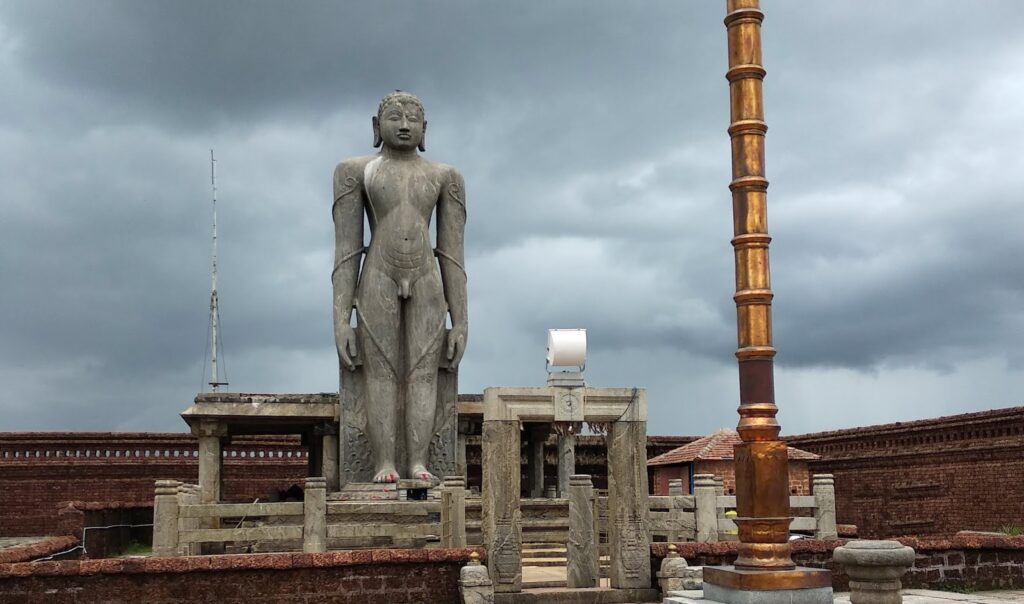 This Shravanabelagola is located on the Vidyagiri hills and is a Jain pilgrimage site. This has a monolithic statue of Bahubali. This is made of granite and is 57 ft.

Pilgrims visit this place every 12 years for the Mahamastakabhisheka ceremony.

How to Reach Shravanabelagola

Mysore Airport is only 85kms from Shravanabelagola

You can get buses from Hassan to Shravanabelagola.

There is a train station at Shravanabelagola. There are 5 different trains connected here from Bangalore each day.

You can make a choice of dharamshalas or an ashram for your stay here.

Tipu Sultan’s Summer Palace in the state of Bangalore is an ideal example of the Indo-Islamic architecture. This was the summer residence of Tipu Sultan, the Mysorian ruler. Hyder Ali started the construction within the Bangalore Fort’s walls. This was completed in 1791 during the reign of Tipu Sultan. 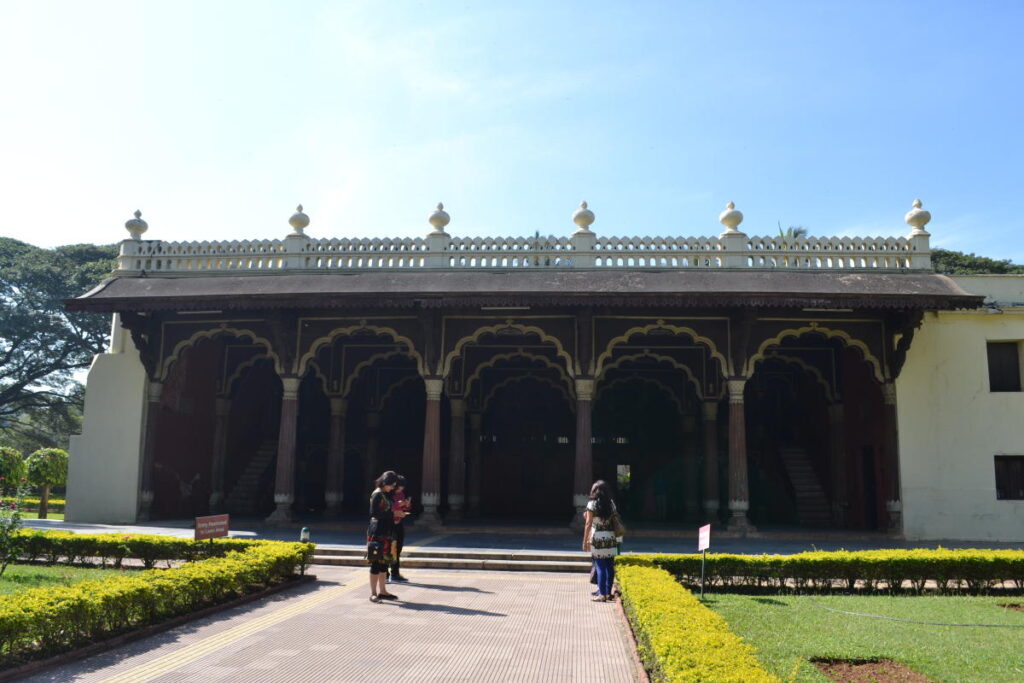 This Tipu Sultan’s Summer Palace is also known as the ‘Abode of Peace’. This structure is famous for teakwood carvings besides the architecture. It has been said that there are many hidden chambers in this palace that were discovered later by a guide.

This palace is one of the popular tourist’s attractions as it also houses a museum. This museum has more than 1000 photos.

This gallery features James Hunter’s sketches. He was a lieutenant in Royal Artillery and also a painter. He took part in many campaigns and used to sketch the everyday lives of the military. An entire passage has been dedicated to his sketches.

Madikeri Fort, known as the Mercara Fort, is in the district of Kodagu. This was built by Mudduraja in the last quarter of the 17 century. This was a palace which was built inside the fort and was, later, rebuilt into a fort of bricks and stones by Tipu Sultan. This was named as Jaffarabad. 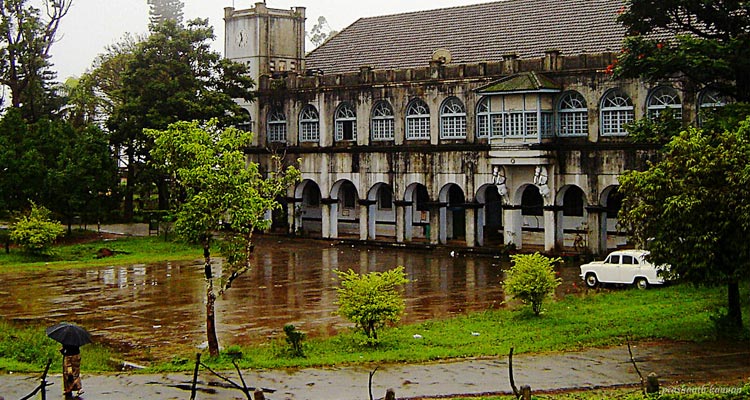 Lingarajendra  Wodeyar II built this with bricks and mortar.

This fort represents a rich historical and cultural background due to the many battles witnessed. It came under Doddavira Rajedra’s control in 1790.

There are no fees for visiting the Madikeri fort. The timings are from 10am to 530 pm. This fort remains closed on Mondays.

How to Reach Madikeri Fort

Kannur station is only 113kms from the Madikeri fort. From here you can either take a bus or hop into a cab. You can also take a bus from Bangalore, Mangalore or Mysore. This depends on your convenience.

A royal palace, Bangalore Palace, is located in an area that was owned by the Rev. J. Garrett in Bangalore. This is built to look like the replica of the Windsor Palace. Rev’ J. Garrett was the 1st principal of the Central High School, which is now Central College. 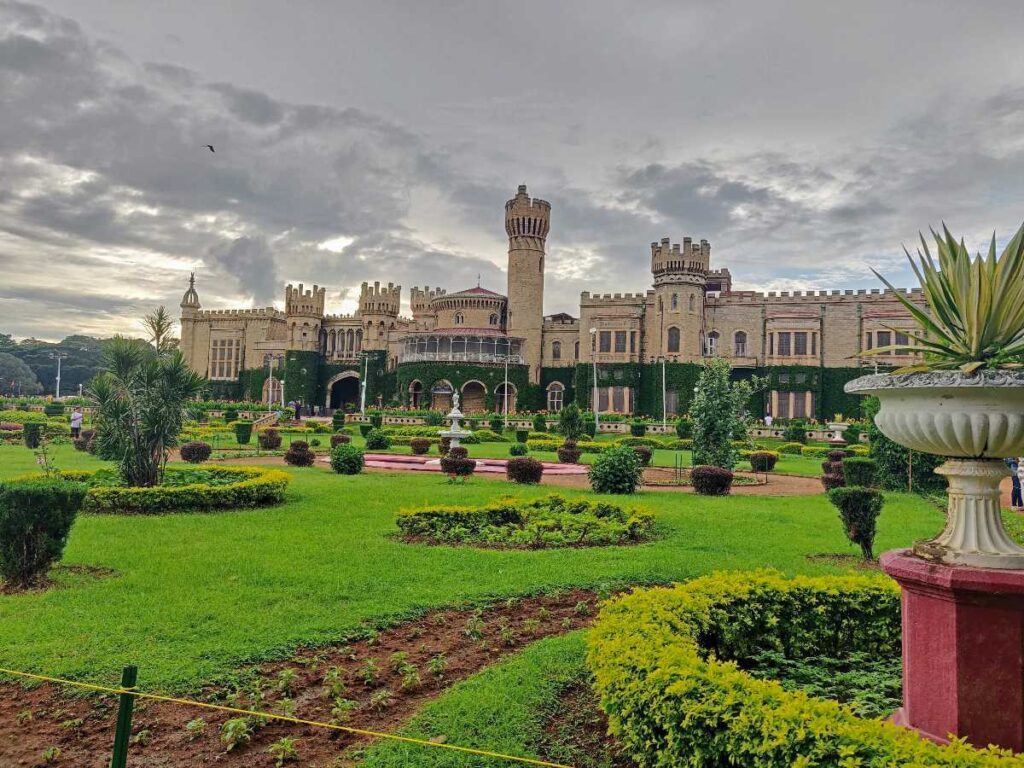 This palace is famous for the magnificent interiors, the Tudor styled architecture and captivating sights.

This palace is open on all the weekdays.

Timings: You can view this palace anywhere between 10am and 5pm. The total tour of this palace can take 2 to 3 hours.