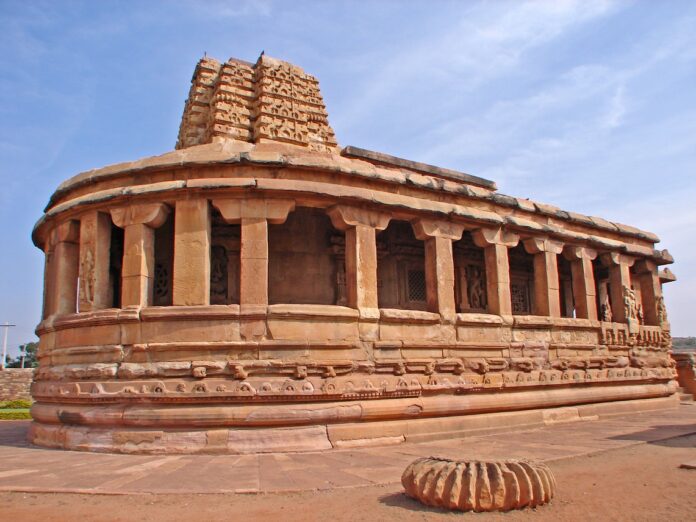 The Durga temple is a Hindu temple of the medieval era that is located in the Karnataka state in Aihole. This name is misleading as the temple is not named after Goddess Durga. A theory states that this temple stands near a fort-like enclosure ruins or durg.

According to another tradition followed locally, a lookout and a durg of stone rubble was assembled on the flat roof and thus this was named Durga temple by the locals. This temple was dedicated to Vishnu and Surya, the Hindu Gods. This temple is dated by the early scholars to 5th century CE. Later this was revised to be from the 6th century to the early 8th century.

More about the Durg Temple

This Durg temple is known to be iconic due to its apsidal layout and tends to be a ‘must’ visit for those visiting Aihole. The shape is very similar to the 1st or 2nd century BCE, the Buddhist Chaitya halls that are found in the Ajanta Caves. This temple stands on adisthana that is highly moulded and also a tower that is damaged, having a curvilinear shikhara. The amalaka crown of the damaged tower lies on the ground. A passage that is covered and colonnaded runs around the sanctum. This has major carvings. The main hall (mukha mandapa) and the community hall (sabha mandapa) display intricate carvings.

This temple displays gods and goddesses from Shaivism, Shaktism and Vaishnavism traditions of Hinduism reverently. The statues include Vishnu, Shiva, Harihara (half Vishnu and half Shiva) , Durga in the form of Mahishasuramardini killing the demon, Goddess Yamuna and Gang Surya, Brahma, avatars of Vishnu that include Narasimha and Varaha. The friezes in the temple tell stories of Mahabharata and also Ramayana. The artwork in the temple shows scenes of everyday life and couples.

This Durga temple complex has 7 Hindu monuments. You have the Suryanarayana temple next to the Durga temple. This has a shikara in the shape of a pyramid on the top. The Surya statue holds a lotus flower in each hand in the sanctum (garbhagriha). This is in a chariot with seven horses carved at the bottom. Though the outline of the temple is intact, most of the details have been damaged.

The Durga Temple Complex houses the Art Gallery and the Aihole Museum. This is being managed by the Archeological Survey of India. This museum has a display outdoors with artwork, excavated statues, temple parts that have been demolished in the past, and hero stones. This museum also has a collection indoors of the best preserved pieces of temple parts and statues found in that region. This collection includes images of Parvati, Lord Shiva, Lakshmi, Vishnu, Saraswati, Brahma, Saptamatrika, Durga, Indra, Surya and others.

The Lajja Gauri that is life-size, is a part of the collection indoors.

Navratri is the best time to visit this Durga temple Complex as this is the time Durga is worshipped with all fervor. Plan a trip to Aihole and geta gimpse into the festivities of Navratri.