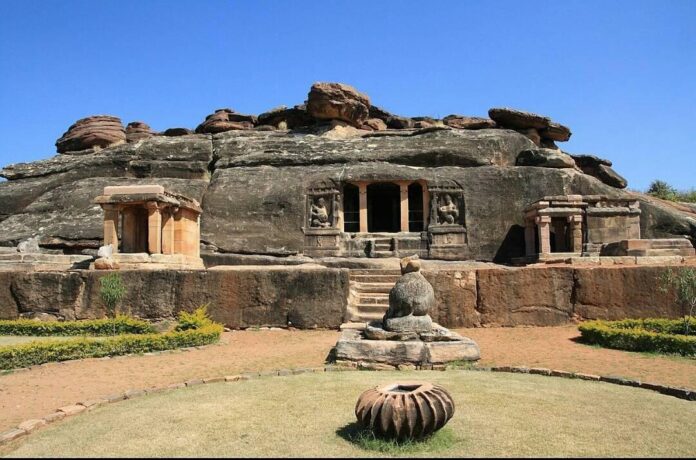 This Hindu temple that is rock-cut of Ravana Phadi in Aihole was made during 550 AD. At one time, this temple was decorated with stunning artworks and paintings. At present you find only the remnants of the paintings on the ceilings due to lack of preservation.

Aihole used to be the capital during the Chalukya dynasty. This consists of almost 125 temples. Most of these temples are Hindu ‘rock-cut’ temples. This ‘rock-cut’ temple of Ravana Phadi has Lord Shiva worshipped here.

Setting of the Ravana Phadi Caves

The temple is cut in ‘sand-stone’. Ravana Phadi has a vast flat field in the front. This is considered as unique amogst the different Indian temples that are ‘rock-cut’. You find the opening of the temple facing the south-west. The cave is on a platform and you need to climb a number of staircases to reach the cave.

In front of the entrance hall you find a colossal pillar based on a quadrangle. You also find Nandi bull, the ride of Lord Shiva in a ‘sitting’ posture, at the entrance.

You find hallways with the pillars on the side of the entrance. This can enhance the total beauty of the architecture. The area at the entrance is also ornamented with columns that are carved in stone. There are different artworks of deities’ well-built on the entrance sides. This depicts the wealth sentinel.

The mandapa is a rectangular hallway inside the cave. This appears to be larger as compared to the Badami Cave. There is a carving of a big lotus on the ceiling. On the side walls you find the image of Lord Shiva in the incarnation of Ardhnari. This is the embodiment of half man and half woman, with a trident in his hand.

There is another image of Lord Shiva on the opposite wall accompanied by Parvati, Bhagiratha, Vishnu and other deities and gods.

On the sides of the Mandapa, you find two chambers. On the left you find stairs that lead you to one of the chambers. This chamber contains artwork of Lord Shiva in the incarnation of Nataraja.  You also find reliefs of Goddess Parvati, Lord Ganesha, and the Heavenly Mothers, Sapta Matrikas. Lord Shiva has one snake around his neck and holds one snake in his hand. There are no such cravings in the right chamber.

There are more stairs beyond the mandapa leading to a smaller chamber. This contains artworks on the side walls. There is a carving of Goddess Durga. In this depiction, she slays Mahishasura.

The Ravana Phadi Caves is considered to be a crowd puller. This is one of the renowned historical destinations in Aihole. This whole temple is carved out of a single rock.

Badami is one of the closest city and is connected well with the rest of the Karnataka. You can connect via airways, railways and even roads. The closest airport is the Belgaum airport.

This temple remains open till 6pm.This cave is a ‘must’ visit for all those who are passionate about history, architecture and natural beauty.

The Biligiriranga hills are referred to as ‘Biligirirangan’ hills in geology and biology and this hill range is in Karnataka south-west, with Tamil Nadu...