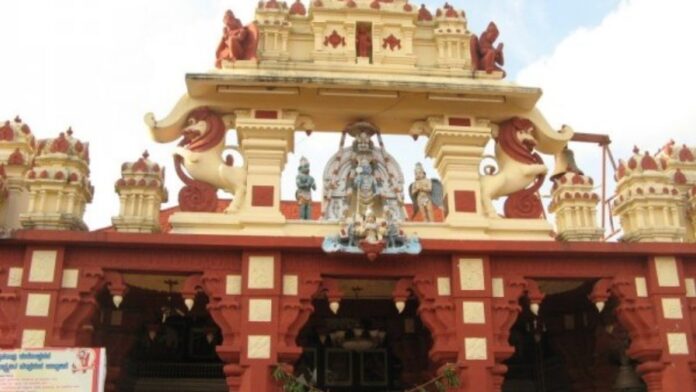 Sri Krishna temple, Udupi, is an important site for pilgrimage in South India. This is a well-known Hindu temple that is dedicated to Lord Krishna and Dvaita Matha. This area of the Matha is very similar to an ashram, which is a holy place for living and worshipping. All around the Sri Krishna temple are many other temples, one of which is Udupi Anantheshwara Temple. This temple is more than a thousand years old.

Jagadguru Shri Madhavacharya, a Vaishnavite saint founded this temple in 13th century. He was a founder of the school of Vedanta, Dwaita. Madhavacharya is said to have founded the Shri Krishna’s vigraha in a ball of gopichandana. Madhavacharya has stated in his book that the Vigraha is placed facing west (Paschimabhimukha). The other Vigrahas in the Ashta Muthas also face west.

Devotees can have a darshan of the Lord Krishna through a window on the inner side. This window is known as the Navagruha Kindi. They can also have a darshan from a window on the outer side known as Kanakana kindi. This has an arch named after him. The immediate front of the Vigraha is covered by a window called the Navagraha Kindi. This is often mistaken to be the Kanakana kindi.

Saint Kanakadasa, according to a legend, was of low caste and was not allowed to enter the temple. With all these restrictions, he went behind this temple to pray. He did this from a small rack in the wall. Lord Krisha, pleased with his dedication, turned and gave him a darshan

Adjacent to this is Kanakadasa Mantapa, depicting the saint’s statue.

The Kanakadasa window is a 9 holed window that is attached to one of the walls in the Chandrasala hall. You feel a sublime ambience in this hall due to the holy sound made by the multiple bells hanging at the entrance that is arched, along with the burning glow of the earthen lamps.

The devotees can sit there and meditate with silent prayers or peep through the window to get darshan of Lord Krishna. Lord Hanuman in a meditative pose is on one corner of the temple.

There s a platform that is raised by four pillars overlooking the Chandrasala hall. The traditional deepastambam is housed here. This hold an oil lamp considered ‘sacred’.

In the circumambulation’s path that is on the right side is the founder, Sri Madhavaacharya, statue. Lord Panduranga’s shrine is on the northern side of this statue.

Next to the southern entrance of this temple you have the Madhwapushkarni, the holy tank. The entrance that is on the eastern side to the Balakrishna sanctorum is beautifully flanked by the five figures of Lord Vishnu in metal. He is mounted on his Garuda holding the discus and the conch. This entrance on the east opens only once in the whole year. That is on Vijaya Dashami.

According to old beliefs it is said that a follower of Lord Parusharama, King Rama Bhoja, had installed the statue of Lord Shiva (Lord Ananteshwara). There is another belief that states that the temple Chandreshwara ws built in the same spot where Chandra performed a penance for getting rid of the Daksha Prajapati’s curse.

Udupi is at a distance of 400 kilometers from the city of Bangalore. The nearest airport is Mangaluru, which is around 60 kms. Udupi is also well connected via road and rail. You can take a private bus or even a government bus.

There are many affordable places you can stay in Udupi.