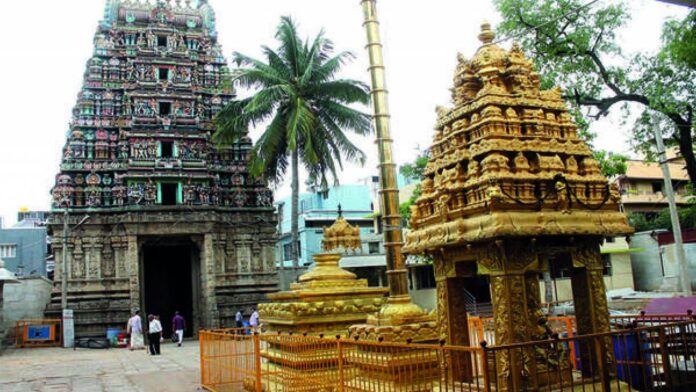 Located in the Halasuru (Ulsoor) neighborhood, the Halasuru Somshwara Temple in Bangalore is said to be one of the oldest temples dating back to the period of Chola. This temple is dedicated to Shiva, the Hindu God.

During the period of the Vijayanagara Empire there were many modifications and additions made. This was done under the rule of Hiriya Kempe Gowda II.

The plan of the temple follows the Vijayanagara architecture elements. This is at a lower case. This temple has a garbhagriha (square sanctum) surrounded by a passageway. This sanctum is closely connected to a hall (mantapa). The walls here are decorated with sculptures and pilasters in frieze. This mantapa that is closed, is further connected to an open mantapa. This has 4 ‘bays’ that are projecting. This is the area between the 4 pillars. The piers that lead to the sanctum and also those facing in the outward direction are the mythical beasts pillars (Yali). The gopuram on the eastern side is typical structure of the 16th century.

In the east direction you have the brahma samba. The base radius is around 2 feet and the height is around 18 feet.

This complex has multiple notable features and decorative sculptures. Near the tower, you find a kambha (a notable pillar) over the gopura (entrance gate). You find well sculptured and well defined sculptures of different gods and goddesses in the tower.

The navagraha temple, which is a shrine for the 9 planets, is in the north. This has 12 pillars. Each of these pillars represents a saint. The sanctum’s entrance has 2 sculptures representing 2 doorkeepers. These are known as dwarkapalas.

Some of the other interesting art works include sculptures depicting King Ravana lifting the Mount Kailash to appease Lord Shiva. This also has sculpture with Maa Durga slaying the demon, Mahishasura, depictions of the marriage of Lord Shiva to Parvati, the seven sages of the Hindu lore (saptarishis).

Similar to other historical places, Someshwara temple is an active place for worship today. You have devotees thronging from all around the city to show obeisance.

Many of those touring Bangalore visit this place for its history and architecture. You have 10 shrines within these premises. Prayers are offered not only to Lord Shiva, who is the presiding deity, but also to Lord Vishnu and Lord Brahma.

Mahashivratri is the best time to visit this temple due to the liveliness. Besides this, there is another festival organized here. During this festival, the idol of Lord Parvathi, is taken out in a procession and paraded.

Timings of the Someshwara Temple

The timings of the Someshwara temple are anytime between 6am to 9pm. This temple remains closed for a couple of hours during the afternoon.  Visitors can attend the aarti in the morning or in the evening.

Visitors are advised to dress appropriately, in traditional clothes if possible.

The Durga temple is a Hindu temple of the medieval era that is located in the Karnataka state in Aihole. This name is misleading...

India is one country that has many diverse states. Each of these has its own set of cultural heritage, Natural beauty, temples, waterfalls, rivers...