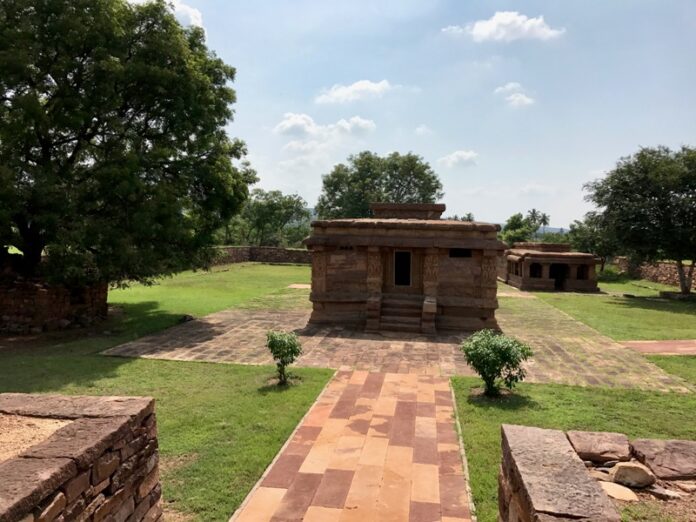 The Hucchappayya Matha temple is around south of the Durga temple by 1 km. This is on the other side of the Aihole village, a little isolated from the other clusters of temples. This consists of 2 Hindu monuments. The one in the front is a Shiva temple and is larger as compared to the 2nd one. This temple is walled on all four sides by stone. There are steps that lead to the mandapa. This monument faces east towards the sunrise. Though extremely blank and simple, this has 4 columns.

One of the carvings of a couple has placed a horse-head on the woman, seeking attention from a man. The man expresses shock on his face.

The mandapa inside the doorway has ceiling with 3 intricate large circular carvings. Each of these carvings shows Vishnu, Brahma, and Shiva o the respective vahanas. In the middle of the mandapa floor you find a Nandi sitting. This is facing the sanctum which has the Shiva Linga.

There are 2 inscriptions in the temple in old Kannada, along with the standing Ganesha and standing Shiva. There are different friezes and reliefs on the mandapa walls. These include more amorous couples. The temple, on the top, is flat sans any super structure. This seems to be from the 7th century.

A Hindu temple, the Huchappayya Gudi, is located around 100 meters to the southwest of the Hucchappayya Matha. This is in the farmlands, more towards the river and away from the village. This is a simple 2 x 2 square temple facing east with an almost square sanctum. This has a front portico, also square, a mandapa that is square (mandapa is 24 x 24)

The portico consists of 4 pillars. The sabha mandapa also has 4 pillars. There are 4 pillars supporting the main hall and is similar in size to the portico. The Rekhanagara of the temple is North Indian in style. This has squares that rotate and rise in a curvilinear smooth more towards the sky. The tower seems to be damaged and the kailasha and the top amalaka is missing.

This temple is known for the intricate carvings on the pillars, both, in the inside and the portico. This temple is also known for the artwork on the ceilings and the inner walls. The carvings depict religious themes (Shiva Nataraja on the wall, and Vishnu’s avatar Narsimha) on the wall. You also find the Garuda man-bird and dwarpalas of Lord Shiva. These carvings show the daily life of the people, that includes musicians, dancers, and individuals in the posture of Namaste, a couple carrying some offerings for prayers, animals and flowers.

There is a slab outside that is carved with seven mothers (Saptamatrikas) of the Shaktism tradition. There is an inscription in the temple in old Kannada in the main hall, on one of the pillars.

Hucchappayya Gudi dates back to the period between the 6th and 7th century, that is, the Early Chalukya period.

Trinesvaraswamy Temple Mysore: The Trinesvarswamy temple is dedicated to Lord Shiva. This is located in the north-east of the fort that faces the Palace...