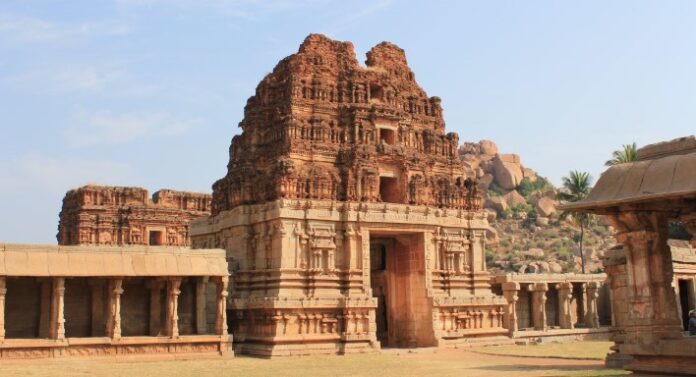 The Achyuta Raya temple, or the Tiruvengalanatha temple in Hampi, is a splendid example of the Vijayanagara style of architecture. Built in 1534 CE, this temple was among the last structures to be built before the downfall of the Vijayanagara empire.

The Achyuta Raya temple is one of the most beautiful structures of Hampi. Located between the Matanga hills and Gandhamadana, this magnificent structure is one of the four major complexes in Hampi. The temple is dedicated to Lord Tiruvengalanatha, an avatar of Lord Vishnu.

The Achyuta Raya temple is around 1 kilometre to the east of the Virupaksha temple. The Tungabhadra River lies close to a part of its sacred centre. This temple is uncommon owing to the fact that it faces north. The temple can be reached by passing through the Courtesan Street, from the Kodandarama temple. This is also known as the Riverside Ruins Path or the Kampa Bupa’s Path. This leads to the minarets of the Achyuta Rama temple.

Alternatively, the temple can be reached by climbing the stairs near the Nandi, or the Monolithic Bull, situated towards the east of Hampi Bazaar. This way is quicker, and also offers a good view of the temple plan. This way also offers a bonus visit to the Hanuman shrine.

Achyuta Deva Raya was the younger brother of Krishna Deva Raya and the ruler of the Vijayanagara Empire from 1529 to 1542 CE. The period of his reign was a period of unrest. With enemies waiting to strike and bring the empire down, Achyuta Deva Raya had to contend with the likes of Aliya Rama Raya, who was contending for the throne. Throughout his reign, the king had to contend with manipulations on all fronts, leading to a weaker kingdom. He was imprisoned by Aliya Rama Raya in a coup in the year 1540 CE and died in the year 1542 CE. The Tiruvengalanatha temple was built during his reign and is therefore popularly referred to as the Achyuta Raya temple.

The Achyuta Raya temple complex and the market street are located in a valley between the Matanga and Gandhamadana hills. Partly due to its location, the seclusion of this temple ensures that it is less crowded.

The main shrine of this temple is in the middle of two concentric, rectangular courtyards. The inner flanks of the courtyard walls are lined with pillared verandas. The outer cloisters, or walkways, are in a state of ruin and disintegration, with pillars scattered along the wall base. The temple courtyards can be accessed through two large, ruined towers.

On reaching the inner court, you can spot a chamber that faces the porch taking you to the central hall. There is a tiny shrine chamber, which once held an image of Garuda, the eagle God.  The open hall holds some of the best carved pillars in Hampi. The pillars on either side of the porch depict lion-faced Yalis on elephants, with armed soldiers holding chains that hang from the beasts’ mouths. The entire theme is carved on monolithic blocks of rocks.

The door to the inner sanctorum is flanked by two giant doorway guard deities holding clubs. The pillars also showcase carvings with various themes such as Lord Krishna practising his flute while calves watch with interest, an infant Krishna dancing while holding a snake by its tail, or Lord Vishnu blessing an elephant.

The northwest corner of the outer compound also has a Kalayana Mandapa, or a marriage hall, for the annual wedding of the Gods and Goddesses. The second compound also has a water channel running through it. The wide Courtesan’s Street can be seen in the front of the temple. There is also a tiny opening towards the northwest of the outer compound that leads to a boulder that sports a carving of a fierce 10-armed Goddess. Ahead, a narrow path winds southward, leading to the Matanga Hill.

As you walk through the temple complex, you will find yourself experiencing an era of grandiosity. Though this striking temple is in ruins due to reasons such as attacks by the Bahamani kingdom, or even forces of nature over centuries, you can experience its sheer beauty, architecture, and magnificence.

How to get there

Hampi is reachable by air, rail, and road. The nearest airport is Bellary, which is 64 km from Hampi. You can take a bus or taxi from the airport.

Hampi does not have a railway station of its own, but is well connected to the nearest railway station, Hospet. On reaching Hospet, you can hire a taxi to take you to Hampi.

You can also reach Hampi by road, as it has a good road network. Various buses connect Hampi to major towns and cities of Karnataka. You also have the option of hiring a private cab, an A.C. bus, or a Volvo bus. Bengaluru is around 288 km from Hampi.

There is no particular season to visit this place, as everything is available for tourists all year long. However, if you wish to attend the Hampi festival, winter is the best time to visit. The festival is held in the month of November, when the weather is pleasant.

Hampi was declared a World Heritage Site by UNESCO in the year 1986. The Achyuta Raya temple, one of the last relics built by the Vijayanagara empire, is a site to behold and worth a visit for its architectural beauty.

In the Sirsi and Kumla forests in Uttara Kannada, in Karnataka, you find the village of Yana. This is well known for the karst...